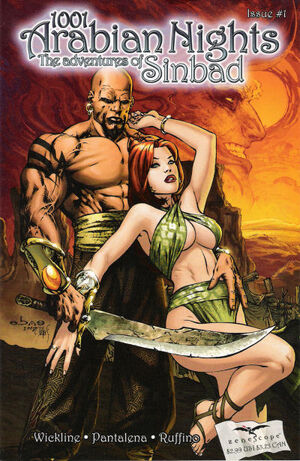 Appearing in "Sinbad and the Eyes of Fire: Part 1"Edit

Synopsis for "Sinbad and the Eyes of Fire: Part 1"Edit

From the company that brought you smash indie hits Grimm Fairy Tales and Return To Wonderland, comes an exciting new fantasy/adventure series you absolutely dont want to miss. The fantastic tales of 1001 Arabian Nights have entertained and enchanted readers for hundreds of years. Now Zenescope brings you a bold and edgy reinterpretation of a classic hero. After being falsely accused of murder Sinbad must set out to find the one artifact that can ultimately clear his name. But his journey to a bizarre, volcanic island in search of the first piece of the mysterious relic is interrupted when he comes face to face with the beautiful but dangerous witch Queen Alorana who has other plans in mind for Sinbad and his crew. Dont miss the epic fantasy/adventure series that will grab you from page 1 and not let go!

Retrieved from "https://heykidscomics.fandom.com/wiki/1001_Arabian_Nights:_The_Adventures_of_Sinbad_Vol_1_1?oldid=1336923"
Community content is available under CC-BY-SA unless otherwise noted.