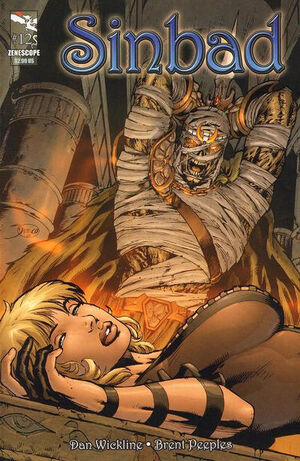 Appearing in "Sinbad and the City of the Dead: Part 5"Edit

Synopsis for "Sinbad and the City of the Dead: Part 5"Edit

The City of the Dead holds many secrets and terrible dangers. Giant scorpions, skeletal warriors and other living nightmares walk its streets. . . all under the control of a being of unimaginable evil. Buried underground for thousands of years, his decaying flesh and tattered bandages a constant reminder of a bitter betrayal, the ancient Wizard Terrae Motus plans to make the world to suffer for his pain...and Sinbad and his crew are first on his list.

Retrieved from "https://heykidscomics.fandom.com/wiki/1001_Arabian_Nights:_The_Adventures_of_Sinbad_Vol_1_12?oldid=1336964"
Community content is available under CC-BY-SA unless otherwise noted.