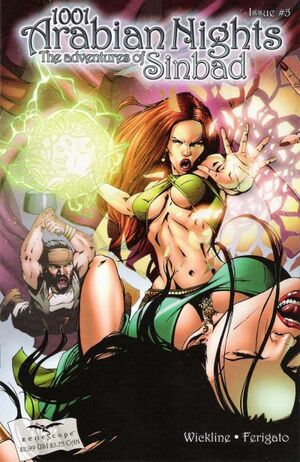 Appearing in "Sinbad and the Eyes of Fire: Part 5"Edit

Synopsis for "Sinbad and the Eyes of Fire: Part 5"Edit

The evil wizard, Kabrit Amud, is free after centuries of imprisonment and only Sinbad and company stand in his way. Although part of the Sunfury Amulet has been recovered, Sinbad must now escape with his life which is never a sure thing when facing the sorcery of age old evil. Meanwhile back on Marut, Samelia continues her battle with the Witch Queen Alorana but gets a little help from a friend.

Retrieved from "https://heykidscomics.fandom.com/wiki/1001_Arabian_Nights:_The_Adventures_of_Sinbad_Vol_1_5?oldid=1336928"
Community content is available under CC-BY-SA unless otherwise noted.