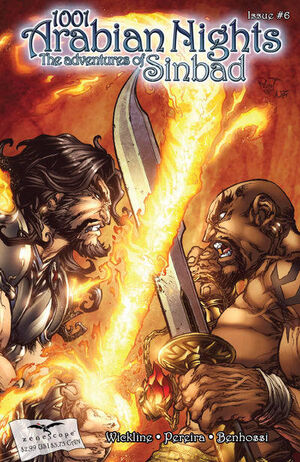 Appearing in "Sinbad and the Eyes of Fire: Part 6"Edit

Synopsis for "Sinbad and the Eyes of Fire: Part 6"Edit

Having retrieved the second half of the Sunfury Amulet, Sinbad and his crew must race back to the volcanic island of Ma'ru. The wizard Kabr't Am'd and his army of fire demons are hot on their tail, determined to retrieve the powerful magic amulet. Meanwhile Pots rescue of Samelia from the Witch Queen Alorana doesn't go as planned. Don't miss the exciting conclusion to the first story arc in this hot new series from Zenescope.

Retrieved from "https://heykidscomics.fandom.com/wiki/1001_Arabian_Nights:_The_Adventures_of_Sinbad_Vol_1_6?oldid=1336929"
Community content is available under CC-BY-SA unless otherwise noted.