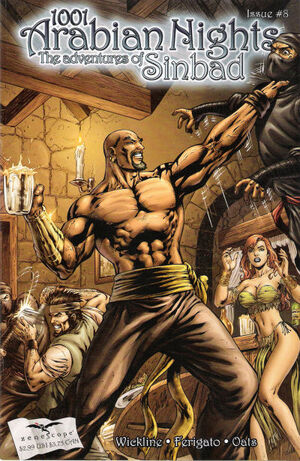 Appearing in "Sinbad and the City of the Dead: Part 1"Edit

Synopsis for "Sinbad and the City of the Dead: Part 1"Edit

Part one of Sinbad's next adventure starts here as Sinbad and his crew head to Egypt in order to find the next piece of the Jericho visor called the Crown of Anubis. While his men stop for some rest and relaxation, Vu accidentally starts a bar fight which escalates rather quickly. Meanwhile a mysterious yet beautiful woman from Sinbad's past pays a visit and offers to guide Sinbad on his dangerous quest. Now is the time to join the series that reinvents the legend of Sinbad, as he and his crew set out on yet another incredible adventure.

Retrieved from "https://heykidscomics.fandom.com/wiki/1001_Arabian_Nights:_The_Adventures_of_Sinbad_Vol_1_8?oldid=1336934"
Community content is available under CC-BY-SA unless otherwise noted.