Start a Wiki
Part of the '100th Anniversary Special' event 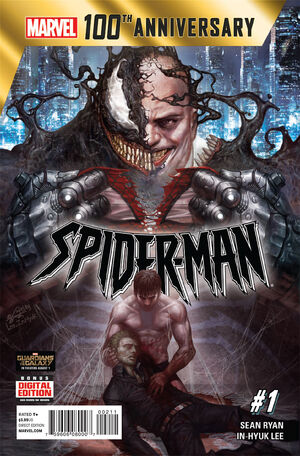 The last few months have not been easy. I lost someone very important to me. Then I got power I didn't earn. Why do I never see it coming? It always end the same way. I get lost inside the power. I think I'm above it all. I lost sight of what's important. And I break everything. But nothing is unfixable. It just won't be easy. You taught me that, Aunt May. And I swear to you, I'll never forget it again.

In the office of Wilson Fisk, the Kingpin, Eddie Brock is dying of a gunshot wound. Peter Parker asks the Kingpin why he killed Eddie, and the Kingpin tells him the first rule of business: eliminate the competition. The Kingpin proclaims the symbiote is his - he paid for the symbiote to be embedded with technology allowing the wearer to control almost any machine on the planet, and that Eddie and Peter's fight was a method of finalising the symbiote's software. The symbiote bonds with the Kingpin and he punches Peter through the office window and out onto a giant electronic billboard prominently displaying an image of Mary Jane Watson.

Peter slides down the billboard before finally stopping at the very bottom. The symbiote is now able to travel via technology, and the Kingpin appears through the billboard before Peter, taunting his relationship with Mary Jane and asking him she is "always a bit out of reach, isn't she?" Peter is astounded that the Kingpin knows his history with her, and the Kingpin reminds him that with the technology infused symbiote, there is no secret he doesn't know, no place he cannot get to, and no object he cannot control. Peter reminds him this is too much power for anyone and in response the Kingpin hits Peter with a bolt of electricity.

Peter falls and lands on a car, asking a pedestrian which way north is. The pedestrian doesn't know, and Peter laments the fact that he used to know all this. The Kingpin, controlling the parked cars, detonates them and hurls Peter away, where he lands at the intersection of 56th Street and 6th Avenue. As he tries to head north, the Kingpin uses New York City's technology as a camera and attempts to run him over with a car.

Successfully wall-crawling to the top of a skyscraper, Peter is forced to leap off it when the Kingpin sends a helicopter crashing down on the roof. He moves to Central Park, using firewood to create a burning stick to wield against the Kingpin. The Kingpin appears and with one leap, he embeds the stick in the symbiote, forcing it open and pulling the Kingpin out. As the symbiote burns away, Peter heads to a familiar location to rest.

At the former home of Aunt May, Peter reflects on how he lost sight of what was important after gaining power he didn't earn, and as a result he had broken many things. Gathering some sewing equipment, blue cloth, and red thread, Peter recalls Aunt May's lesson: nothing is unfixable, it just won't be easy. Peter vows to never forget this lesson as his traditional red and blue Spider-Man costume begins to take shape.

• What does the wallcrawler look like in the far-flung future of 2061? The Kingpin has taken control of his ultra-powerful techno-symbiote suit. One of his most powerful weapons in the hands of one of his most powerful enemies, Spider-Man will have to prove once again why he’s the greatest superhero in the world!

• With the Kingpin in possession of a deadly weapon capable of limitless control, it’s up to the one and only Spider-Man to stop him. But how can he? Find out as the wallcrawler of tomorrow fights for his life when the 100th ANNIVERSARY SPECIAL – SPIDER-MAN #1 hits comic shops this July!

Mary Jane Watson is also a renowned supermodel, appearing in a perfume advert on an electronic billboard.

Retrieved from "https://heykidscomics.fandom.com/wiki/100th_Anniversary_Special_-_Spider-Man_Vol_1_1?oldid=1477049"
Community content is available under CC-BY-SA unless otherwise noted.