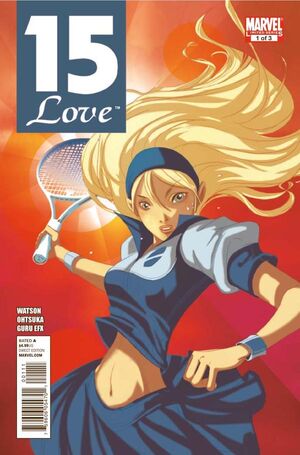 You wanna whup that Benjamin kid who beat you like a rented mule this morning? You wanna wipe that smile off her face, right?

TEENAGE TENNIS ACTION AS ONLY MIGHTY MARVEL CAN DELIVER! Tennis is Mill Collins whole life...but as the lowest ranking student at the Wayde Tennis Academy, she’s about to lose her scholarship, and any chance at reaching her dream. Her coach has given up on her, her aunt thinks she doesn’t try, and the only one who believes in her is a washed-up drunk...how wrong can things possibly go before Mill catches a break?

This title shares an almost identical name with 15/Love, a Canadian TV series about teens at a famous tennis academy.