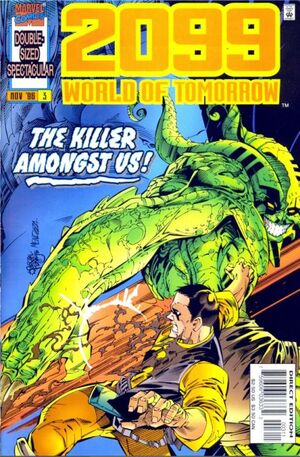 Two stories set in Marvel's fantastic futureverse! First up, Spider-Man is trapped in the newly risen kingdom called Latveria! Then, Doom and the X-Men foes known as the Phalanx race to find the mysterious Scout! What does he know, and how will It affect the world of tomorrow?

Retrieved from "https://heykidscomics.fandom.com/wiki/2099:_World_of_Tomorrow_Vol_1_3?oldid=1340395"
Community content is available under CC-BY-SA unless otherwise noted.