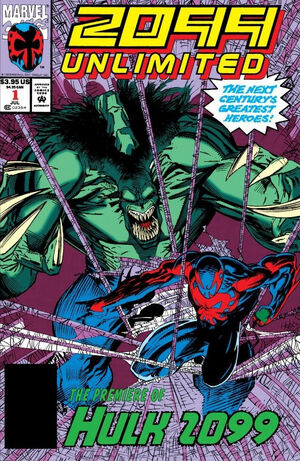 Appearing in "Nothing Ever Changes!!"Edit

Synopsis for "Nothing Ever Changes!!"Edit

This issue contains two separate stories. The first relates to Spider-Man 2099 as he attempts to stop a murderer obsessed with evolution. The story begins as a man is murdered in his hospital room. His parents walk in on the killer who reveals that his motive is that their son had a genetic defect that made him unworthy to live. The murderer spares the parents as they are now too old to reproduce and further spread the genetic defect, however he does threaten to kill any more children they may have had on his way out.

We then see Spider-Man stopping a mugging. Though he saves the victim, he is soon chased off of by the corrupt "Public Eye" (police force in the year 2099). Miguel (this incarnation of Spider-Man's alter ego) gets back to his workplace, Alchemax, and must quickly change for a lunch date.

During Spider-Man's date, the murderer's identity and backstory are revealed in a flashback sequence. We find that he himself passed on a genetic defect to his child which resulted in that's child death. Gerald Bernardson (the murderer) became obsessed with evolution, eventually leading to his divorce and a complete mental breakdown. He experiments on himself which eventually leads to him being able to adapt to any situation or attack instantaneously.

When Gerald attempts another murder, Spider-Man jumps in to save the day. They fight for a while, eventually leading to something of a draw. Gerald decides that his killing methods are not efficient enough and runs off. Spider-Man is unable to stop him from leaving.

The second story is about Hulk 2099. The Hulk is on the hunt and he reveals that his enemy is civilization itself. After a brief chase with some security forces, Hulk reverts back to his human form, John Eisenhart. John is a Hollywood lawyer using his career to hunt down an organization called "Knights of the Banner". They're a group of wannabe warrior types. After tracking them down, John comes across a young boy that's been staying with the Knights of the Banner. He reveals that the name of the group is not a reference to flags, but to BRUCE Banner (the original Hulk). Before John can secure the group's movie rights, however, security forces move in and attempt to arrest the Knights of the Banner. The Knights resist and are decimated. The boy that John met earlier blames John for bringing security down on top of them and activates the Knights' secret weapon, a GAMMA Bomb. That's how Hulk 2099 is born.

After dropping the boy off, John does some research on his computer. He finds that the private security group "Sweet Dreams" has been ordered to kill a young pop star who refuses to cooperate with the government run propaganda machine. Sweet Dreams soldiers bust in to the girl's apartment and blow her producer away. Just before they can finish the girl off, Hulk 2099 jumps in and saves her. He pretty much rips their forces apart.

Retrieved from "https://heykidscomics.fandom.com/wiki/2099_Unlimited_Vol_1_1?oldid=1340383"
Community content is available under CC-BY-SA unless otherwise noted.