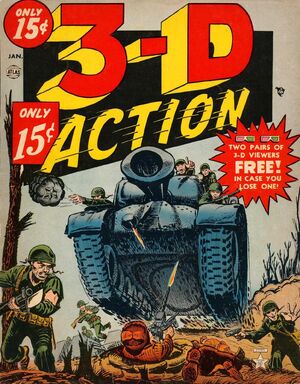 Battle Brady and Socko Swenski are on patrol when they are suddenly ambushed by General Olga and her minions on horseback and almost trampled to death under the hooves of their horses. However despite this sneak attack, the two Americans manage to subdue Olga and her minion and take them prisoner. In order to get back to base, they spot a junk ship along the river and convince the owner to give them a ride. However this turns out to be a Chinese trap, and they are easily subdued and taken prisoner. General Olga then shows off her master plan, they sail to a group of other junk ships which have all been secretly equipped with cannons and are intended to go along the rive and attack the nearby American base.

Olga then tosses Battle and Socko beneath the belly of the ship with a window looking outside so that they can see the destruction reigned down upon their fellow soldiers. However, left to their own devices, Battle and Socko manage to free themselves from their bonds. Battle then takes the bullets in his ammo belt and they break them down and use the gun powder to make a crude explosive. Tossing it at the sails of the ship, the explosive goes off igniting the sails, the wind carrying the flames so that each of the boats catches fire.

This reveals the boats to a group of soldiers on bazooka patrol and they blast the ships. As the ship holding them is struck, a hole is blasted in the side allowing Battle and Socko to abandon ship and swim to safety. Getting to shore, Socko believes that General Olga was slain in the explosions, but Battle is not too sure and suspects that they have not seen the last of her.

Appearing in "The Silent Spy!"Edit

Synopsis for "The Silent Spy!"Edit

Appearing in "The Big Fight"Edit

Synopsis for "The Big Fight"Edit

Socko Swenski gives lessons on how to secure a hill in combat.

Appearing in "Death Under the Sea!"Edit

Synopsis for "Death Under the Sea!"Edit

Retrieved from "https://heykidscomics.fandom.com/wiki/3-D_Action_Vol_1_1?oldid=1341089"
Community content is available under CC-BY-SA unless otherwise noted.