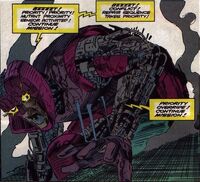 The Sentinel that would name itself 3.14159 was one of the Sentinels brought to Earth-616 by the time traveler Trevor Fitzroy of Earth-1191. As part of the "game" he was playing with the Upstarts, Fitzroy sent his Sentinels to murder the Reavers, and their leader Donald Pierce.[1]

This Sentinel was severely damaged and shut down, and constantly doused in the bio-mechanical fluid that Pierce had used to create his cyborgs and androids. Later when Wolverine and Jubilee went to the Reavers headquarters to investigate on orders from Professor X they accidentally reactivated the Sentinel.[2]

Having become sentient due to its exposure to the bio-mechanical fluid, it determined that it should act in the best interest of Sentinel kind and decided to wipe out all of humanity. Using a time warp to transport itself (along with Wolverine and Jubilee) to the Anthill, the base of the now deactivated Sentinels built by Larry Trask, it built a device that would cause a solar flare and eradicate all human life on the Earth.[3]

Wolverine and Jubilee attempted to stop him, and it reactivated the Sentinels there to defend the base. Ultimately, 3.14159 witnessed human compassion and changed its mission, destroying the solar flare and deciding to reprogram the Sentinels to be able to feel the same emotion, a process it estimated that would take 2137.23 years. Sealing itself and its minions off from the world it used the time warp to teleport Logan and Jubilee to California.[4]