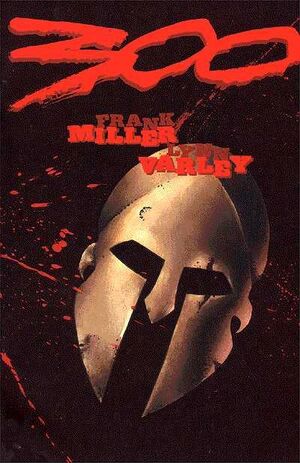 On the third day Xerxes has the Spartans surrounded, their remaining allies (Thespians) already dead. He gives Leonidas one final chance to surrender and kneel to him. After some hesitation, Leonidas finally complies and throws down his arms. This, however, is a trick by Leonidas, and signals the Spartans to fight. Leonidas throws his spear at Xerxes, intending to make the "God-King" bleed, and succeeds. The Spartans are killed to the last man by arrows.

The story then shifts about a year later and ends as now-Captain Dilios relates the heroic sacrifice of Leonidas and his Spartan comrades to his troops before the historic Battle of Plataea, which would destroy the Persians once and for all.

Retrieved from "https://heykidscomics.fandom.com/wiki/300_Vol_1_5?oldid=1342254"
Community content is available under CC-BY-SA unless otherwise noted.