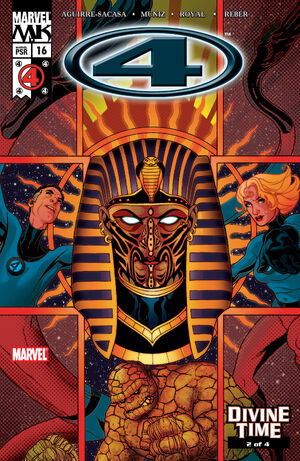 Mister, no offense, but......you must not know my mom and dad too well.

With his parents trapped in ancient Egypt, Franklin Richards and HERBIE flee from Ramades, the time traveller who is responsible for the current crisis. Their attempts to flee are in vain as their pursuer can shift forward in time to confront them at every pass. When Ramades clarifies that he has trapped the Fantastic Four in the year 2000 BC where they will surely die, Franklin is amused because their foe doesn't appear to know his parents very well.

In ancient Egypt, Mister Fantastic assures Ben and Sue that they will be fine, as he is absolutely certain that someone tampered with their Time-Platform. Suspecting that this is the work of Kang the Conqueror, given their current location, Reed uses his studies in Egyptology to figure out where they are and where the nearest oasis is located. He tells them that they are going to find the Oracle of Siwa. With the terrain too cumbersome to walk, Reed has Sue construct a crude form of transport using her invisibility powers.

Elsewhere in time and space, Johnny Storm awaken to find himself in some apocalyptic future where Doctor Doom has conquered New York City. No sooner does he learn this that he is confronted by a Doombot that finds no record of him existing in its data-banks and threatens to eliminate him, but Johnny incinerates it before it gets the chance.

While on present day Earth, Ramades begins announces to the world that he has come to conquer their time. After making a massive pyramid and army appear, he then begins confronting the leaders of the world. Ramades appears in Canada, the United Kingdom, Japan and the United States, ordering all the world leaders to stand down. With his advanced technology, soon the world is on its knees. While Ramades secures his conquest of the Earth, Franklin Richards and HERBIE the robot are forced to watch as prisoners. However, young Franklin has not given up hope that his family will return and rescue him.

Back in Ancient Egypt, the three members of the Fantastic Four find the Oracle at her oasis. However, Reed sees past the deception and orders the "Oracle" to reveal his true form. As it turns out, the "Oracle" is actually one of the Time-Keepers, who informs them that he cannot bring them back to their home era as he is trapped in this time as well. He explains that he can see into time however, and informs them that their foe is not Kang, but his son Ramades. He explains that the boy was born from Kang during his time as Rama-Tut and abandoned. At the age of 20, Ramades discovered his father's time travel equipment and used it to try and become even greater than his father before him. With the Avengers disbanded, Ramades has put his sights toward conquering the one era that his father has failed to capture numerous times: the present. While the Time-Keeper is certain they are trapped, Sue refuses to give up with her son trapped in the present with Ramades.

In the alternate future, Johnny is fighting off the Doombots when he is suddenly saved by someone who makes him invisible to the Doombots. At first Johnny thinks it is his sister, but is shocked to discover that it is his niece Valeria, who is now an adult. While Back in Ancient Egypt, the other members of the Fantastic Four are trying to figure out how to get back home when suddenly there is a flash of light and Nathaniel Richards -- Reed's father, appears before them.