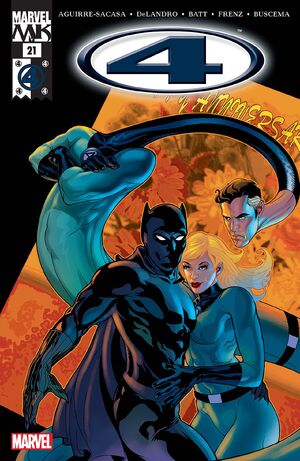 Susan Richards! You had a "thing" with the Black Panther?

Susan Richards is awoken by her husband who crawls into bed to spend some quality time with her. However, this turns out to be nothing more than just a dream as the alarm goes off, waking Sue up. Seeing that she spent another night alone in bed, she finds a letter from her husband Reed waiting for her tellign her that he is working on a scientific errand of utmost importance in Washington, D.C. This upsets Sue because today is a special day, but it appears that none of the other members of the Fantastic Four seem to have noticed. Instead the Invisible Woman goes about her day. After a battle against the Mole Man, she takes Franklin to soccor practice. It's there that she gets a phone call from Alicia Masters who has remembered the big day. When Alicia suggests a girl's night out, Sue likes the idea and agrees to go out.

After setting the children up with a sitter and changing into a slinky dress and exits the Baxter Building. Outside she is greeted by a limo which has been ordered up by Alicia. Along for the ride are the She-Hulk, Sharon Ventura and Emma Frost. Although Sue is happy to see the others, she is not entirely sure why Emma Frost had come along. Reading Sue's thoughts, Emma isn't sure herself starting a sour note between the two women.

Soon the women are at a bar having drinks and when they were interrupted by a man trying to pick up women. Emma threatens to re-write his mind if he doesn't leave them alone, and the man hurries away. This starts a series of bar hopping and as she is watching her single friends dancing with people about the bar and wonders how different her life would have been had she not married Reed Richards. These thoughts are also picked up by Emma Forst, who beleives that if Sue's concerns about if she could have ever become a movie star are invalidated.

Later while getting food at a papaya restauraunt, the subject of Sue's devotion to Reed comes up. They talk briefly about the Sub-Mariner, but Sue maintains that she has never cheated on her husband. She is then grilled about never thinking about it, and that's when Alicia Masters mentions the Black Panther. Sue is shocked that Alicia would bring up a secret they have kept for years. Sue decides that she should finally come clean about this one brief moment of indisgression....

It was years ago when the Fantastic Four were meeting the Black Panther for the first time. After the team assisted T'Challa in defeating Klaw[1], they were invited to stay the night in Wakanda. From the first, Sue was interested and attracted to the Black Panther due to the mystery surrounding him as well as his regal position. That evening when Reed was too busy with his experiments to pay attention to her, Sue decided to go out for a walk around the palace grounds. Hearing the sound of a piano being played, Sue followed it to find the Black Panther alone. T'Challa offers to show her the garden around the palace. Sue has never seen such beauty since Reed once took her to planet Vesuvius.

The pair then went out to the Black Lagoon for a swim. Although skinny dipping was necessary, Sue was bashful about disrobing before the king of Wakanda, but he was mindful of their modesty. However, as the two began swimming their mutual attraction to one another welled up to the point where they almost kissed. However the two stopped themselves at the last moment, and later the two decided that they could never have betrayed the trust of Reed Richards and the santity of his marriage with Sue. Sue later returned to her husband, who seemed unaware that she was ever gone. The following morning before the Fantastic Four made their departures, T'Challa looked longingly toward Sue as she left, happy to be with her husband.

When Sue finishes her story, the other women are disappointed about the tale lacking any sordid details. Even though she is reminded of all the times that Reed has not been around or the time that she almost divorced him, Sue explains to the others that when she married Reed it was for the long haul and that is what she signed on for. Emma is the only one unimpressed with Sue's explanations and departs. Sue finally returns home at six in the morning to find her husband waiting for her in their bedroom. As it turns out, Reed hadn't forgot that it was their wedding anniversary and that he wasn't in Washington, D.C. at all. In fact, he was planning an anniversary surprise: He had just returned home from Vesuvious with some flowers from the world that so enchanted Sue all those many years ago.