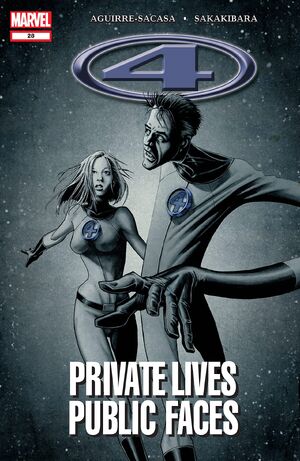 I helped her, I know I helped her......but everything about tonight feels wrong and rotten.

Susan Richards is finishing up paperwork for Fantastic Enterprises with the help of their robotic secretary Roberta. After she is finished she meets with an employee named Bethany Palmer. Palmer confides in Sue and admits that her husband Jeff has been physically and sexually abusing her for the past four years. Learning that her husband is a prosecutor and that she has nobody else to support, Sue decides to get involved. She tries calling Reed for assistance but when he doesn't answer his phone, she decides to deal with the matter personally and on her own. Sue then travels to the apartment that Bethany shares with her husband. When Bethany enters her home, Jeff is there and in a fury over her coming home late. It's when he threatens to harm her that Sue makes herself visible to him. She then incapacitates Phil and orders him to grant Bethany an uncontested divorce and to stay out of her life forever. Sue then tells him that she will have him under constant surveillance using Fantastic Four technology to make sure he gets the help he needs and never harm another woman again. If he fails to do any of these things, she threatens to use her invisiblity powers to internally harm him in the same way he has harmed his wife, as it will leave no evidence. With the deed done, Sue and Bethany leave. When Sue sees her off, she lets the entire situation sink in and is physically ill. After she is finished throwing up, she tries to call Reed, who still isn't answering, leaving her to wonder where he husband is.

Unknown to her, Reed is in a secret meeting with members of the Illuminati. There the meeting is interrupted when Reed's phone begins to vibrate. However, this isn't Sue, it's Christine Palmer at the Metro-General who has called to inform him that Martin Simms is in his final moments. Without a moment to lose, Reed flies over to the hospital so he can be with Simms as he breaths his last, as he had promised. His dying words are for Reed to contact Simms's ex-wife and tell her that he is sorry and that she was right about the smoking. With that, Martin Simms dies as his life flashes before his eyes. His last thoughts are of finally being reunited with his son in the afterlife. Thanks to the telepathic implant Reed has implanted in Simm's ear, Reed is able to see it all. After dealing with the paperwork, Reed returns home to find his wife waiting for him. She is upset that he didn't answer her calls, but as the pair discuss what they had been up to things seem to go back to normal, unaware of how their lives will be affected during the upcoming Civil War.