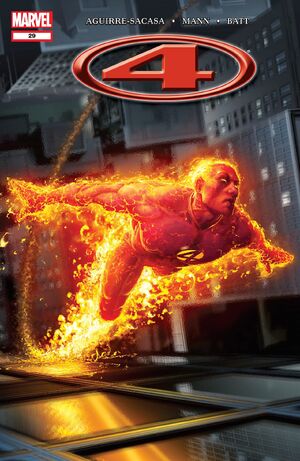 And when we formed the Fantastic Four? That there would be no secrets between anyone on the team?

With the Hulk exiled from Earth, the Fantastic Four have ventured to the Savage Land to recover the remains of the rogue robot known as Godseye which the Hulk seemingly destroyed. Although Ben and Johnny decry this mission, Reed impresses upon them the danger as the Godseye is a sentient machine that can repair itself by cannibalising technology and as such they have to ensure the machine is completely destroyed. Leaving their ship off shore, the Fantastic Four arrive on the island and split up to hunt down ant remains of Godseye that might remain active. Johnny and Ben encounter a portion of it first when it gets the drop on them. While the Godseye leaves a portion of itself attached to the Thing's arm, Johnny flies it up into the sky in the hopes of destroying it with a nova blast. However before he can do so, the robot's shiny frame attracts a pteradon which grabs Godseye and flies away.

Elsewhere on the Savage Land, Reed and Sue come across a field of grazing triceratops. There they spot another section of Godseye attacking one of the grazing dinosaurs. Sue is shocked when the robot mentions Reed's name, however she is forced to protect herself and Reed from the startled dinosaurs while he destroys the robot. In the aftermath of the battle, Sue demands to know what he isn't telling her about this mission. Meanwhile, Johnny manages to spook the pteradon over an active volcano, sending the portion of Godseye falling into the lava where it is incinerated.

By this point, Sue and Reed are waiting at the beach, where she keeps on pressing Reed to tell her what he knows about the Godseye. When Reed asks her what he could be lying about, she doesn't have an answer and figures he probably isn't. It's at this moment that Ben and Johnny return from their mission. Ben has just finished destroying the portion of the Godseye that attached itself to his hand. With their mission the Fantastic Four return home. That evening, as Sue tucks the children into bed, Franklin asks why his father isn't doing it tonight and asks if he's working on a secret project. Sue isn't sure, but at that moment, Reed is in communication with someone, whom he tells that all evidence of the Godseye has been destroyed.