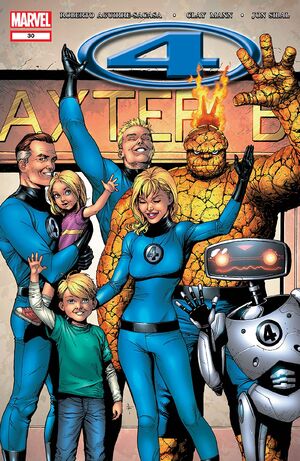 As they have been since our..."project" with Banner began. Compounded by the face that Stark's paranoia has begun to seem...less paranoid.

In preparations for a public open house, Susan Richards is overseeing a mural of the Fantastic Four being painted in the lobby. With her is the Fantastic Four's long time mailman, Willie Lumpkin, who confirms Sue that their super-hero personas are what the general public knows them for most of all. Sue tells Willie that they are more than just super-heroes she thinks back to what they have been up to that week. She recalls that while Reed was giving a lecture at Stetson University in Florida, Ben helped an elderly woman on Yancy Street, Johnny and his girlfriend Kourtney Keaton were off to a charity auction, and Sue was visiting the troops. However, Willie reminds her how the team is mostly known for their constant clashes with Galactus and Doctor Doom than anything else. Sue figures it's just as well, as the mural will be painted over once the open house is done, and bids Willie adieu.

Meanwhile on the roof of the Baxter Building, the Thing has woken up from sun bathing to find that Johnny has spray painted "Material Girl" across his chest in green paint. Alicia tries to talk Ben down, but this eventually leads into another one of Ben and Johnny's trademark scraps. Down below, Sue tries to get Reed to come out of his lab as the Sub-Mariner has arrived for a visit. However, Reed is in his think-tank and won't come out. When she asks Namor if there is anything she can do for him, he tells her that he can wait until Richards is available. Inside his think tank, Reed dreams various "infinite possibilities" and is disturbed by images of Sue and Namor running across a beach hand-in-hand. The next one is of Namor carrying Sue across the water. Finally he dreams about Namor being attacked by the Red Ghost and his Super-Apes while he and Sue watch on, which causes him to relax.

At that moment the Inhuman royal family teleport down from the moon for the open house. However Medusa is still cross with the Fantastic Four over their past interference in the lives of Aleco and Reynor. However, Crystal informs Sue that the Inhuman/Alpha Primitive couple broke away from Attilan and began a settlement where their respective races can intermingle. Crystal then excuses herself while she goes and torments Johnny as he is coming out of the shower by stealing his towels. Elsewhere, Ben and Alicia pay a visit to her father the Puppet Master whose hands are still healing from being crushed. After their visit she leaves him with a chunk of clay, despite Ben's reservations over her doing so. Back at the Baxter Building, Sue is unimpressed that Doctor Strange has brought the Salem's Seven with him as guests to the event, mostly because they recently tried to kill the Fantastic Four. Strange explains that he has taken them under his guidance as they had nowhere else to go and assures her that if they are invited under her roof they will cause no trouble. Sue grudgingly allows Strange and the Seven to attend the party.

Downstairs, Namor finally meets with Mister Fantastic and tries to discuss Illuminati business, but Reed refuses to discuss issues without all members present, nor in his home and ends the subject. Namor then asks why the Fantastic Four hold an open house every year, and Reed explains that they do it so the public knows that the building is more than just a headquarters for a team of super-heroes. Namor laughs at this because it reminds him of the annual tradition of opening the palaces of Atlantis to the common people. Their discussion is interrupted when Sue tells Reed it's time to address the public. Soon the Fantastic Four are before a large cheering crowd. Reed is lost in thought and is asked by Sue if he is thinking about one of his infinite possibilities again. As it turns out, Reed is, and it is about a possibility wherein Sue convinced him to put off his rocket launch for another day. The following day, instead of turning into the Fantastic Four, Reed and his friends all have a picnic in Central Park.