View source
Part of the 'The Pine Barrens' story arc 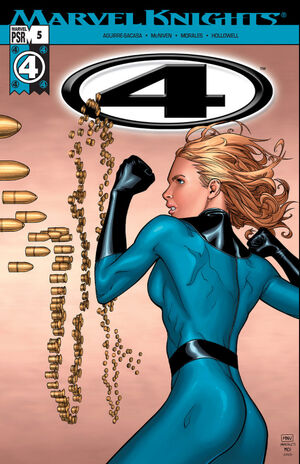 I got a bad feeling about this. Extra-friggin'terrestrials, am I right?

Having lost their fortune and their headquarters the Fantastic Four are trying to ease into their new life. Mister Fantastic, the Invisible Woman and the Thing have taken Franklin and some of his school friends on a camping trip in the New Jersey Pine Barrens. Along the way the Thing tells the boys the urban legend about the Jersey Devil. The version of the story he tells is about Betsy Shroud, a woman who bore thirteen children in the 1700s. Her thirteenth child was so hideous her husband threw the deformed newborn into the rivers which is why the waters are red, even to this day. The Thing goes on to say that the baby survived and emerged from the waters as something more demon than human. It's at this point that Sue interrupts Ben's story, not wanting him to needlessly frighten the children with a scary story.

Since they are lost, Sue tells Reed to pull over at a nearby general store. Ben is hesitant to go into the store given his appearance but Sue assures him that their fame will precede them. However when Reed goes into the store he finds that the woman at the counter has no clue who they are. When the woman learns that this is their first time in the Pine Barrens she begins lecturing Reed about how they are probably making fun of the people who live here because they are "simple folk". Reed and Sue assure them that they have no intentions of coming in and trying to change their way of life. Meanwhile outside another local approaches the Thing and warns him that if they aren't here to cause trouble they should turn back and leave as camping in the area is not safe. He warns them that there is something in the woods that is dangerous before leaving. When Reed and Sue rejoins the Thing he tells them of the portent of doom he just received. They then are interrupted by a pair of film students who have come to the area to make a documentary about the Jersey Devil and have recognised three members of the Fantastic Four. While Reed gets directions to the campsite from the two would-be filmmakers, the children come across a dog that has been skinned alive. When one of the children suggests that the Jersey Devil did it, Sue tries to quash this idea, telling them that there is no such thing as monsters, knowing full well that what she is saying is not true. Eventually they reach the path to the campsite where they find a sign warning them that the Jersey Devil is real and that people have been taken by the monster. Soon the children are setting up camp, giving Reed and Sue a chance to get a bird's eye view of the area and be taken away by the majesty of the untainted forest so close to their home in New York City. When Sue asks how such a place can be undeveloped, Reed tells her that while many investors have attempted to develop the area, but they have always been blocked.

Back in New York City, the Human Torch is being interviewed by the chief of Engine 39 and Ladder of the New York City Fire Department. After confirming that Johnny is legitimately interested in being a fire fighter. Despite his misgivings the chief decides to give the Torch the job.

Meanwhile back in the Pine Barrens, Mister Fantastic and the Thing are taking a walk to the Mullica River. Reed informs Ben that the river is red thanks to the maroon sap of the pine trees that line the river. Along the way they come across a startling discovery: that an alien ship has landed in the Barrens and its monsters occupants are coming out. Seeing these alien beings, Reed is worried about his with and the children. At that very moment, back at camp, Sue and the children come to the startling discovery that they are not alone.