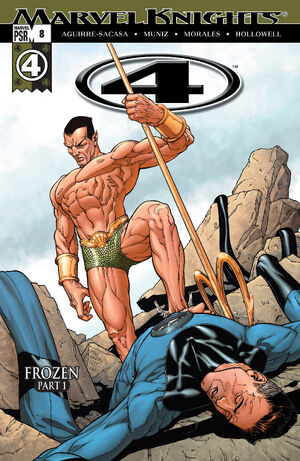 The Watcher has focused his attentions on his long time allies the Fantastic Four who have recently lost their fortune and home. Despite this massive change, the team is doing the best they can given the circumstances. The Human Torch has started working for the New York City Fire Department. While he is mopping the floor, when he is snubbed by the other fire fighters, Johnny complains to the chief. The chief points out that the other man are not quick to be friendly because fire fighters usually clean up after the messes super-heroes make, that they do thankless work while the super-heroes get in the newspaper. Lastly, the chief shows Johnny a memorial for fallen firemen. The chief tells Johnny to cut them some slack.

At the Pembroke Academy the Invisible Woman is teaching her class Shakespeare when she is interrupted by the sudden arrival of the Sub-Mariner. Shocked to find Namor has come to her classroom she tells him to wait for her outside until she can complete her class. Shortly thereafter, Sue and Namor are walking through Central Park discussing the Fantastic Four's recent hardships. While at the moment at the fire station, Johnny overhears a woman who is seeking help trying to find her son who went missing a week prior. She is worried that her son was the young man who apparently fell through the ice on the Hudson River. Although the chief is quick to blow her off, Johnny offers to help her. While at the Museum of Natural History, Namor presses Sue about her problems at home. When he suggests that she leave Reed to be with him, Sue gets angry and calls Namor out for interfering with her marriage once again. The argument gets heated and Namor grabs her arm, hurting her. It's at this moment when Reed interrupts them having tracked Sue down to surprise her with some flowers and he is not impressed with Namor's advances on his wife.

While Reed distracts Namor by comparing him with a remora, he distributes 70% of his body mass into his fist and soon he and Namor are trading blows and soon an all out brawl begins.