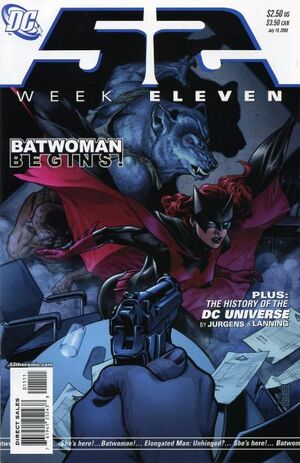 Donna Troy witnesses the climactic events of Infinite Crisis and also discovers that on a "divergent path" (a hint about the storyline in 52), she was supposed to have died instead of Jade. The Orb confirms this -- and so does a Monitor, who appears in New Chronus to Donna's surprise.

Retrieved from "https://heykidscomics.fandom.com/wiki/52_Vol_1_11?oldid=1674963"
Community content is available under CC-BY-SA unless otherwise noted.