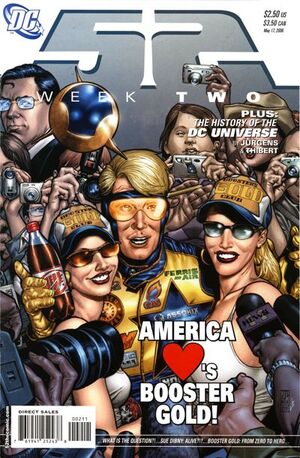 Appearing in "Looking Back at Tomorrow"Edit

Synopsis for "Looking Back at Tomorrow"Edit

On New Chronus, Donna Troy exists as the new Harbinger. She inspects the original Harbinger's orb and learns about the origins of the Multiverse, and the events that led the Maltusian Krona to accidentally create the Antimatter universe. Through the orb, she sees the creation of the Manhunters, and their successors, the Green Lantern Corps.

Donna is not interested in learning the entire history of creation, however. She is more concerned about people – specifically, Earth's heroes. She begins analyzing the events that led to the births of the Supermen of Earth-One and Earth-Two.

Retrieved from "https://heykidscomics.fandom.com/wiki/52_Vol_1_2?oldid=1674958"
Community content is available under CC-BY-SA unless otherwise noted.