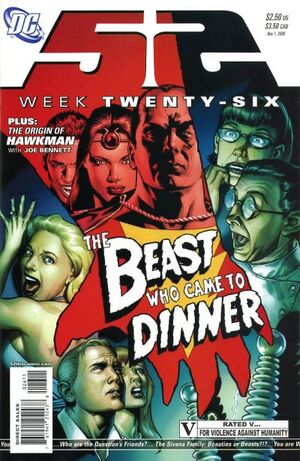 Synopsis for "The Origin of Hawkman and Hawkgirl"Edit

In ancient Egypt, Hawkman and Hawkgirl were once known as Prince Khufu Kha-Tar and Princess Chay-Ara. An evil sorcerer named Hath-Set murdered them and their spirits have been reincarnated time and again across the ages. The lovers eventually found one another once again, and have worked together to bring justice to the streets of St. Roch.

Retrieved from "https://heykidscomics.fandom.com/wiki/52_Vol_1_26?oldid=1695785"
Community content is available under CC-BY-SA unless otherwise noted.