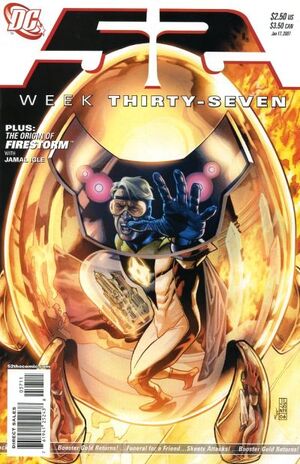 Synopsis for "The Origin of Firestorm"Edit

Jason Rusch was desperate to go off to college to escape life with his abusive father. One day he absorbed the nuclear energy given off by the dying super-hero Firestorm. The energy transference transformed Jason into the new prime host for the Firestorm matrix. He later met with Professor Martin Stein and Firehawk, who have aided him in understanding his new found abilities.

Retrieved from "https://heykidscomics.fandom.com/wiki/52_Vol_1_37?oldid=1693341"
Community content is available under CC-BY-SA unless otherwise noted.