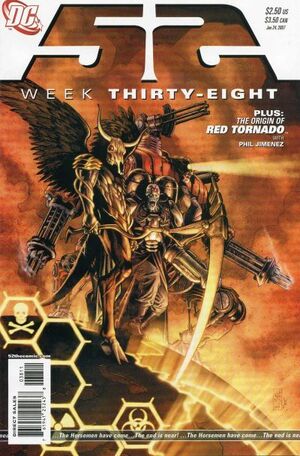 Synopsis for "The Origin of the Red Tornado"Edit

Professor T.O. Morrow created the android known as the Red Tornado. The air elemental known as Ulthoon took control of the Tornado's android body and used him as a weapon against the Justice League of America and Justice Society of America. The Tornado overcame the experience with a new sense of morality. He became a member of the JLA and developed a close bond with Kathy Sutton and her daughter Traya.

Retrieved from "https://heykidscomics.fandom.com/wiki/52_Vol_1_38?oldid=1693044"
Community content is available under CC-BY-SA unless otherwise noted.