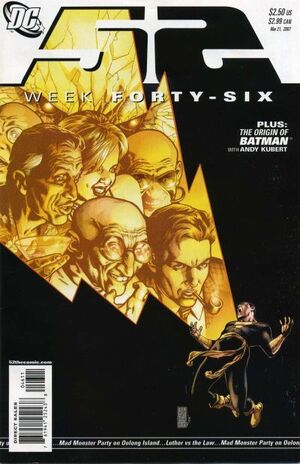 Synopsis for "The Origin of Batman"Edit

As a young boy, Bruce Wayne's parents were slain right before his eyes by a random mugger. Driven by the loss of innocence, he devoted himself to seeking justice. As an adult he trained under the world's foremost martial arts masters. One evening, a bat crashed through the window of his father's study inspiring Bruce to adopt the mantle of the Batman.

Retrieved from "https://heykidscomics.fandom.com/wiki/52_Vol_1_46?oldid=1670734"
Community content is available under CC-BY-SA unless otherwise noted.