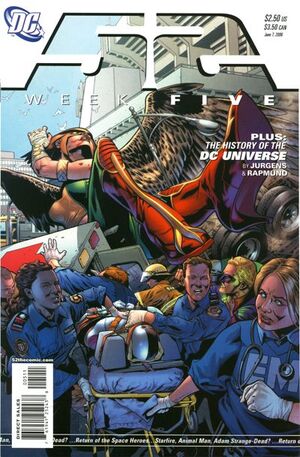 Appearing in "Stars in Their Courses"Edit

Synopsis for "Stars in Their Courses"Edit

Donna Troy recalls the final events and legacy of the Crisis on Infinite Earths: The deaths of Supergirl and Barry Allen; the intervention of the Spectre; the collapse of the Multiverse; the self-exile of Superman and Lois Lane of Earth-Two, Superboy of Earth-Prime, and Alexander Luthor of Earth-Three; and Wally West becoming the Flash.

Retrieved from "https://heykidscomics.fandom.com/wiki/52_Vol_1_5?oldid=1693330"
Community content is available under CC-BY-SA unless otherwise noted.