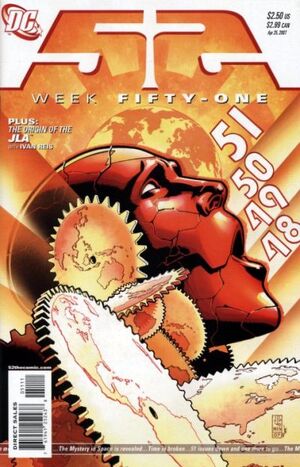 Synopsis for "The Origin of the Justice League of America"Edit

In the Post-Infinite Crisis environment, the Justice League of America was first founded by Aquaman, Black Canary, Green Lantern, the Flash, and Martian Manhunter, with Batman, Superman and Wonder Woman functioning as co-founders. The heroes united to protect the Earth from an alien invasion wrought by a race known as the Appellaxians. Shortly after the invasion, Batman, Superman and Wonder Woman became full-time members. Over the span of many years, dozens of heroes have joined the ranks of the Justice League. The current incarnation of the League is based out of Washington D.C. and consists of Batman, Black Canary, Black Lightning, Geo-Force, Green Lantern, Hawkgirl, Red Arrow, Red Tornado, Vixen, and Wonder Woman.

Retrieved from "https://heykidscomics.fandom.com/wiki/52_Vol_1_51?oldid=1709310"
Community content is available under CC-BY-SA unless otherwise noted.