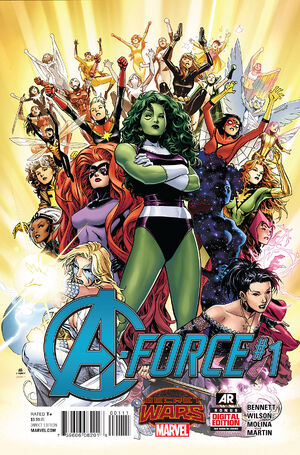 Arcadia is only strong as long as we are united, and A-Force is her defender. It's our honor and duty to protect our island and her people. And that's exactly what I mean to do. Summon the Sub-Mariners! Something has trespassed our borders, something that is a danger to all Arcadia. What it has set in motion, I cannot say. I do not know where or why that monster appeared -- but is cost us one of us. And more may be coming. Tonight, we are going to learn the truth. We are going to learn the source of the apparition that cost us our sister. I won't allow any others to suffer America's fate. We will find the threat. We will root it out. We will know at last -- for good or evil -- what serpents have come into our garden.

• Marvel’s Mightiest Women finally get their own explosive series!

• In a secluded corner of the Battleworld, an island nation is fiercely protected by a team of Avengers the likes of which has only ever been glimpsed before…

• Fighting to protect the small sliver of their world that’s left, the Amazing A-FORCE stands shoulder-to-shoulder, ready to take on the horde!

Retrieved from "https://heykidscomics.fandom.com/wiki/A-Force_Vol_1_1?oldid=1679164"
Community content is available under CC-BY-SA unless otherwise noted.