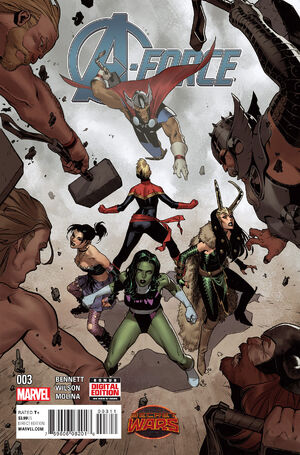 Someone tried to frame the newcomer for this. Someone let in the monster that cost us America Chavez. A-Force... there is a traitor in Arcadia.

• She-Hulk has violated the most sacred rule of Battleworld…

• …and now A-Force is on the run from the planet’s protectors: The Thor Corps!

• And while trying to prove her innocence, She-Hulk discovers that one of her own may have engineered her downfall…

Retrieved from "https://heykidscomics.fandom.com/wiki/A-Force_Vol_1_3?oldid=1679162"
Community content is available under CC-BY-SA unless otherwise noted.