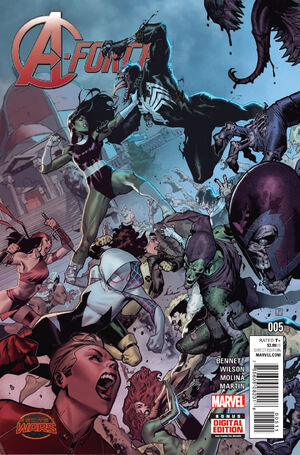 People of the island... we have been given a paradise. This is our home. A beacon amid all the darkness of Battleworld. I allowed myself to be misled. I failed to be worthy of Arcadia. I will not fail to be worthy of you. Anyone who rises today will be counted among A-Force -- will be known, now and always, as a heroine of Archadia! I ask you now, all who are worthy, all who are willing... A-Force... assemble!!

• The EXPLOSIVE finale to the first adventure of Marvel’s mightiest team of Avengers: A-FORCE!

• Though She-Hulk and her team have unmasked the traitor in their midst, the villain won’t rest until their utopian island is RAZED.

• As the horrors of Battleworld bear down on Arcadia, what sacrifices will the members of A-Force make to save their home…and each other?

Retrieved from "https://heykidscomics.fandom.com/wiki/A-Force_Vol_1_5?oldid=1614670"
Community content is available under CC-BY-SA unless otherwise noted.