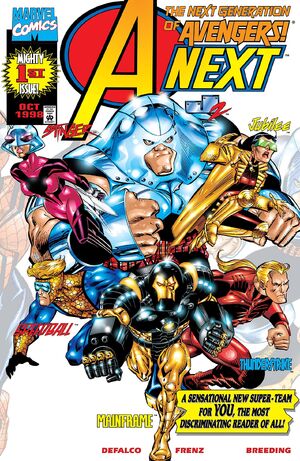 The planet spins! The page turns! And the world still needs heroes! May each and all prove worthy of the privilege before you!

In this spin-off of What If Volume 2 105 and the series Spider-Girl, this is Earth-982's take on who are Avengers now fifteen years after the timeline of Earth-616. The issue begins with the group, consisting of Kevin Masterson (Thunderstrike), Cassandra Lang (The Stinger), Mainframe, Zane Yama (J2), Helen Takahama (Jolt), Robert Baldwin (Speedball), and Jubilation Lee fighting some denizens of Asgard for some reason. The narration focuses on Kevin as he begins to reminisce about how this was all his fault.

Flashing back several hours ago, Kevin has shown up at the Avengers Mansion at the request of Edwin Jarvis, the mansions chief of staff. The Mansion is currently managed by the Maria Stark Foundation, since the Avengers disassembled years previously. At Thor's request, Jarvis gives Kevin the weapon Thunderstrike, which Kevin's now deceased father, Eric Masterson, wielded during his time as hero and Avenger. Kevin leaves the Avengers Mansion only to be attacked by troll-men while still in the compound. While the mansions security measures leap into action, Jarvis sends out the Avengers beacon.

It is only received by Jubilation Lee, now leader of the X-People, and Helen Takahama, now a mother. Cassandra Lang, daughter of former Ant-Man Scott Lang, picks up the signal on her Wasp antenna while out testing modifications for her father and also responds. As Kevin is running through the streets, he also catches the attention of Speedball and J2. Kevin is cornered and at the last second is saved by the mechanical Iron Man-looking Mainframe. As the other heroes show up, they begin to fight the troll-men.

The heroes are shortly subdued by Loki and taken away shackled to Asgard. Loki tells them that he plans to "recharge" Thunderstrike and use it against Thor. Trying to provide a distraction for the heroes, Kevin goes and leaps for the floating mace. Somehow he fuses with the mace and becomes a more powerful version of his human self. The heroes, now freed, fight with all of their might, but the battle is turning against them. Kevin then sends up a beacon and Loki sounds a retreat.

The others are stupefied as to why they did, but figure it out when Thor shows up. Upon returning to Earth, Mainframe brooches the subject of recreating the Avengers. Speedball, Jubilee, and Jolt decline due to personal matters but are always willing to lend a hand. J2, Stinger, and Thunderstrike agree and the issue closes with Jarvis and others looking on at "history being made again".

Retrieved from "https://heykidscomics.fandom.com/wiki/A-Next_Vol_1_1?oldid=1348714"
Community content is available under CC-BY-SA unless otherwise noted.