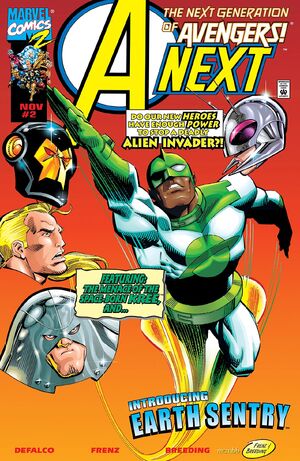 Appearing in "Suddenly... The Sentry!"Edit

Synopsis for "Suddenly... The Sentry!"Edit

The Avengers were summoned to Washington National Park to investigate the crash sites of an unidentified object that was shot down by a defense satellite. They were to assist a team of scientists from the Maria Stark Foundation, led by Dr. William Foster.

Thunderstrike and Mainframe discovered that the second object was a Kree Sentry, which intended to return to the spaceship. It easily defeated the two, but was attacked by J2, who sent the robot flying into the side of the spaceship. The sudden impact caused the ship's security program to activate, and Dr. Foster was caught under a heavy door.

The only way for Dr. Foster's son John to save him was to plug into the Kree ship, which unexpectedly gave him powers of flight and super-strength, as well as intimate knowledge of how the Kree technology worked.

John was able to lure the Sentry into the ship, which knocked it over the edge of a cliff. John then activated a self-destruct sequence, destroying both the robot and the ship. After being offered and turning down a spot on the Avengers, the "Earth Sentry" vowed to protect Earth, then flew off.

Retrieved from "https://heykidscomics.fandom.com/wiki/A-Next_Vol_1_2?oldid=1348715"
Community content is available under CC-BY-SA unless otherwise noted.