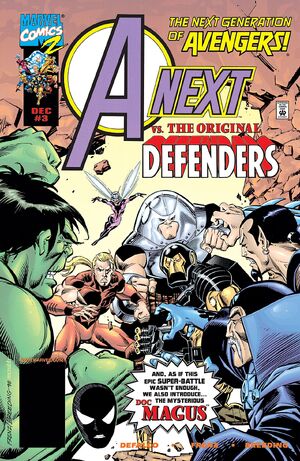 Just remember, things are seldom what they seem.

Appearing in "Down 'n' Dirty With the Defenders"Edit

Synopsis for "Down 'n' Dirty With the Defenders"Edit

Doctor Strange has found out information that shows the fate of the world is at stake due to the research of Doctor Jennifer Bissette. The new mystic supreme, Doc Magus, astral projects into Strange's workshop and tells him to watch his business. Strange banishes him from the room. Magus confers with his friend Deacon, who suggests that if Strange is organizing a group then Magus should get the new Avengers. Strange is then shown tracking down the Sub-Mariner, Namor, who has secluded due to the destruction of his kingdom by Doctor Doom. At the Avengers mansion, Edwin Jarvis is showing around a new technician, Shannon Carter, when Magus pops in and requests the assistance of the Avengers. Strange is then shown finding Bruce Banner in Colorado where he has kept the Hulk at bay and has started a new life, including having a son. Strange uses a spell to bring out the Hulk and put him under Strange's control.

The Avengers all are assembled at the mansion when Jarvis makes a startling revelation that Scott Lang, Cassandra's father, would be joining the group as head technician. Before Cassandra can protest too much, Mainframe draws everyones attention to Doc Magus' problem. Magus and Strange both tell there respective teams that Dr. Bissette's research deals with harnessing the power of the Earth's core. This would eventually lead to catastrophic shifting of the Earth's mantle. The Avengers vow to stop the senseless death and try to find another way to stop her. They show up at the lab in Arizona just as Strange, Hulk, and Namor are about to lay siege. The two groups fight. J2 thinks he was able to take the Hulk down too easily after Stinger disoriented him, but the Hulk comes back and humbles J2. As Thunderstrike is about to confront Strange, Magus steps in and transports Strange with him to a temporary zone. Magus is able to subdue him there and uses the Eye of Agamotto to find out Strange's true intentions.

Back at the fight, Namor and Hulk tear Mainframe in two. Scared, J2 runs away while Thunderstrike assaults Namor, asking him is this the type person he wants to be. As J2 is running away, he is confronted by Mainframe, who reveals the other Mainframe was a robot. With renewed vigor, J2 takes on the Hulk again to get him away from Stinger. Namor stops the two from fighting then because he has seen his errors, saying he will be giving money to Bissette to safeguard the planet if Strange's prediction does come true. Back in the magic zone, Magus finds out Strange had orchestrated this to give the Avengers something to test on, to snap Namor out of his self-deprecating stupor, and Strange says that the Hulk has a destiny to fulfill. The issue ends with the Avengers congratulating themselves while their new assistant Shannon leaves to meet a mysterious group of people in her apartment.

Retrieved from "https://heykidscomics.fandom.com/wiki/A-Next_Vol_1_3?oldid=1348716"
Community content is available under CC-BY-SA unless otherwise noted.