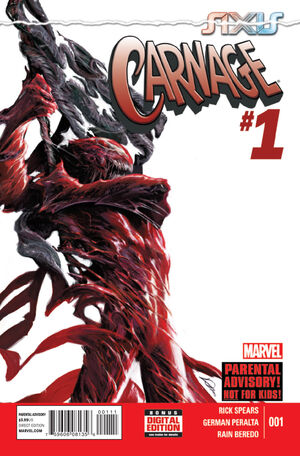 While attending a fancy dinner, a famous reporter is gunned down by a man dressed in the Sin-Eater costume. That same evening, Carnage swings through New York reflecting on how he was once a remorseless serial killer, but how the events of the Axis had left him with an uncontrollable desire to do good, which he hasn't the slightest idea of how to go about doing. Coming across a woman being accosted by a thug, Cletus fantasizes about bisecting her before scolding himself. Punching the thug hard enough to pop one of his eyes out, Carnage is attacked by a second thug and cuts off his arm. Paralyzed by his new conscience when he realizes he went too far, Carnage is attacked by the woman, who he realizes is a prostitute. He knocks the woman out with a light punch, congratulating himself for not killing her, but is yelled at by onlookers for hitting a woman.

At a massage parlour/brothel, Chris Rollins, a reporter, is approached by the Sin-Eater. When Rollins asks if he is a cop, the Sin-Eater remarks that the impostor is dead and takes aim. Rollins grabs the Sin-Eater's shotgun, knocking over a candle that sets the parlour on fire. In the struggle, he rips off the Sin-Eater's mask to reveal a glowing green skull, and the Sin Eater takes advantage of his shock to shoot him.

At the CVN news station, reporter Alice Gleason, Chris' coworker and lover, delivers a heartfelt eulogy. Carnage, observing the broadcast on TV, deduces that she is a good person and decides to ask her for advice on how to be a superhero, but once the cameras stop rolling she reveals herself to be a cold and ambitious woman who had been sleeping with Rollins to further her career. Her boss, Frank, issues her police protection, which she rejects and demands to take Rollins' place reporting on superheroes. Her boss initially refuses, but when she insists tells her to bring him something to prove her worth.

At Alice's apartment, she seduces the police officer sent to protect her. While she's making coffee, he spots someone hiding behind her curtain and opens fire. The intruder, revealed to be the Sin-Eater, is unaffected by the bullet and returns fire, killing the officer. He devours the green spectres that emerge from the officer's corpse just as Alice walks in. As he takes aim at her, rebuking her protests of being a good person, Carnage crashes through the window and shoots him in the head with his own shotgun. Alice faints and Carnage takes her, not noticing the Sin-Eater's head regenerating. Alice regains consciousness webbed to the underside of a bridge, and when she sees Carnage inches from her face screams over his request for her tutelage.

• Carnage is back in NYC and the city will never look at him the same way again!

• Something incredible has happened to the symbiote serial killer in AXIS that will have Cletus and you reeling!

Retrieved from "https://heykidscomics.fandom.com/wiki/AXIS:_Carnage_Vol_1_1?oldid=1412164"
Community content is available under CC-BY-SA unless otherwise noted.