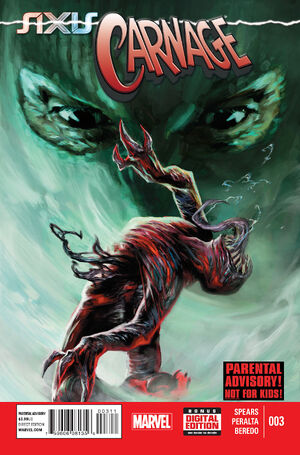 This is her true final lesson. This is what I must understand. To be good. To be a hero-- I must be alone.

While attempting to pursue the Sin-Eater, Cletus is struck by two missiles. He has a vision of an angelic Alice Gleason, who tells him to use his powers for good when he angrily remarks that he could easily kill everyone, before being grabbed by a demonic version of the Sin Eater. Awakening and regenerating, Carnage vows to save Alice.

In the Sin-Eater's lair in the sewers, Alice attempts to postpone her execution by interviewing him, asking to know his story. The Sin-Eater directs her to some old newspaper clippings taken from the original Sin-Eater case, stating that he couldn't save himself, and Alice and deduces that he is Emil Gregg, and that Eddie Brock had been right all along. When she immediately dismisses that, since Spider-Man had unmasked Stan Carter as the original Sin-Eater years ago, the Sin Eater cryptically remarks that "[they] pierced His side with the Spear of Destiny because they could not believe." Alice pressures him for concrete evidence that he is Emil Gregg, and the Sin-Eater unmasks himself to reveal his undead appearance, explains that he can literally eat a person's sins to absolve their soul, and takes aim at her.

Carnage swings to the top of the Empire State Building and unleashes a flurry of tendrils all across New York City, locating Alice just in time to save her from being shot. Carnage drags her out of the sewer and confronts Sin Eater, willingly allowing him to feed off his sin. As the Sin-Eater grows into a giant and proclaims himself a god, Cletus feels the burden on his conscience being relieved. Sin-Eater attacks him but Carnage's overloads him with a last sin: that he loved all the destruction he caused, and he dwindles into a shrivelled corpse that disintegrates. Cletus thanks his corpse for absolving his sins and reaffirms his desire to start over as a new man, claiming that his work is done but Alice picks up the Sin-Eater's shot gun and shoots him in the head. When a surprised Carnage immediately regenerates, Alice flees in the direction of newly arrived police screaming for help. Confused, Carnage asks why she shot him when he saved her, and Alice admits that she lied about being a good person, and that most people are hardly good at all. As Cletus fantasizes about marrying Alice and starting a family, she screams at the police to open fire. Unaffected by the bullets, Carnage misinterprets her betrayal as a way of teaching him that "happiness is death to a hero" and that having a family and loved ones would be dangerous, and that to be truly good and a true hero one must be alone, reaffirming his determination to be a superhero as he swings away.

• Carnage has given up villainy with his newfound change in AXIS!

• But that doesn’t mean that he’s not on the MOST WANTED list.

• And Carnage has to worry about the Sin Eater, too!

Retrieved from "https://heykidscomics.fandom.com/wiki/AXIS:_Carnage_Vol_1_3?oldid=1412166"
Community content is available under CC-BY-SA unless otherwise noted.