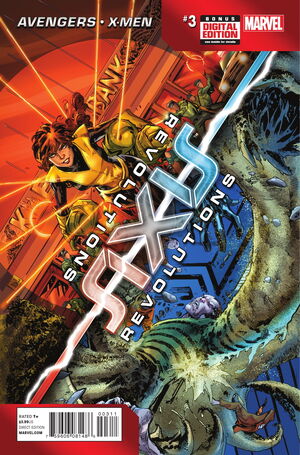 When I saw those bad guys gone good on TV, part of me thought they were crazy. But I gotta admit, doing the right thing like this... It feels pretty damn good. Rico's a good egg. The other guys? Can't say I'm sorry to see 'em locked up. Rico's got a family to get back to. A life. I owed him that... another chance.

• In the wake of their battle with the Red Skull, the world has been altered: Heroes have gone bad! Villains have gone good! And AXIS REVOLUTIONS brings you tales of these shocking turns…

• Sandman reaches out to help a friend…in prison!

• And Kitty Pryde robs a bank??

Appearing in "Castles in the Sand"Edit

Synopsis for "Castles in the Sand"Edit

Retrieved from "https://heykidscomics.fandom.com/wiki/AXIS:_Revolutions_Vol_1_3?oldid=1412150"
Community content is available under CC-BY-SA unless otherwise noted.