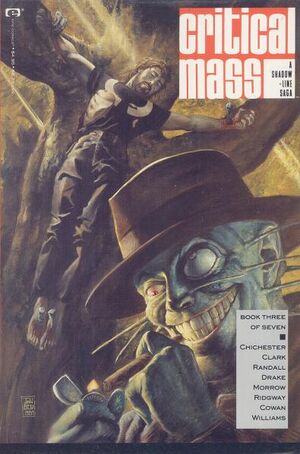 Appearing in "Standing Before the Rubicon / Beating the Devil's Tattoo"Edit

Two tales of the Shadowline Saga! Power Line finally has a chance to kill their hated enemy, Dirk Ravenscore. But something forces them to spare his life. What could it be? The answer will astonish you! Plus, as Shreck stalks Michael Devlin, the latest St. George, the Abbot of the Order of St. George dons his armor for the ultimate battle against Doctor Zero! And Shreck stalks the St. George knight!

Retrieved from "https://heykidscomics.fandom.com/wiki/A_Shadowline_Saga:_%22Critical_Mass%22_Vol_1_3?oldid=1347192"
Community content is available under CC-BY-SA unless otherwise noted.