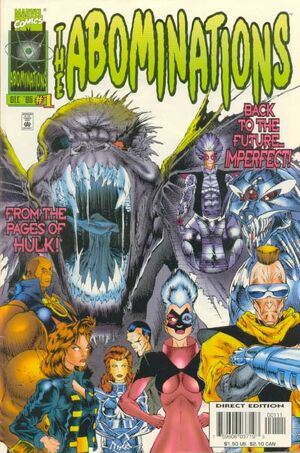 The continuation of "Future Imperfect" A hundred years from now, the evil reign of the Maestro has ended and the peace process has begun. However, a wreck of a man called the Abomination wants to punish the Maestro further still. But if he can't kill the Maestro, he'll kill a frightened woman named Betty who's pregnant with the Maestro's child! Now Janis, the grand daughter of Rick Jones is forced to protect Betty by fleeing through time and seeking out the modern-day Abomination!

Retrieved from "https://heykidscomics.fandom.com/wiki/Abominations_Vol_1_1?oldid=1388556"
Community content is available under CC-BY-SA unless otherwise noted.