Abraxas presumably came into existence when the original universe that eventually branched out into the multiverse was formed, spontaneously assumed the embodiment of destruction that was the counterpart to the very act of creation embodied by the being known as Eternity. Abraxas grew within the core of Eternity, although into each reality Eternity made certain a being existed to keep Abraxas from emerging. This being would later be known as the planet-devouring Galactus. 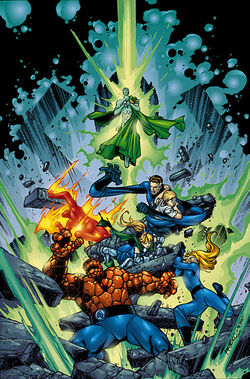 When the Galactus of the prime reality died, Abraxas emerged. He soon began to cut a swath of terror through various alternate realities, including the murder of other versions of Galactus. He used the head of a Galactus to target and home in on the prime reality Earth and to plant a mole in a version of the Herald known as Nova. On Earth of the 616 universe, Abraxas attacked Uatu the Watcher and stole half of his signature medallion.

Abraxas taunted the Fantastic Four with the inevitability of his coming, enticing the team to search for the Ultimate Nullifier, the clues to the location of which were scattered among alternate realities. Ultimately, the Four found the Nullifer when Abraxas suddenly appeared and stole it from them. Abraxas called forth an army of Novas to attack Earth and the Fantastic Four held no hope of defeating him. Instead, Franklin Richards, the son of the Four members Mister Fantastic and the Invisible Woman, combined his cosmic powers with those of his sister, Valeria, to reconstitute Galactus and thus restored balance to Eternity, at the cost of burning out his own powers. Galactus took the Nullifer from Abraxas, giving it to Mister Fantastic who used the weapon, destroying himself and Abraxas. The result served to re-create a reality in which Abraxas never existed, and since all that was had ended, all that is was realigned, allowing Mister Fantastic to survive along with all those who died in Abraxas' reign of terror.

Retrieved from "https://heykidscomics.fandom.com/wiki/Abraxas_(Multiverse)?oldid=1733354"
Community content is available under CC-BY-SA unless otherwise noted.