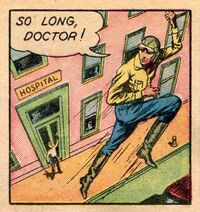 One day as playboy and pilot "Ace" Egan was flying, he encountered a red and yellow alien space ship that crashlanded on Earth. A giant three-eyed yellow and red alien came from inside of the craft and was near death. Unable to survive in Earth's atmosphere, the alien told "Ace" Egan of an invasion from outer space by an alien race know as the Slogons. As he was dying, he gave his power belt to Ace.

Retrieved from "https://heykidscomics.fandom.com/wiki/Ace_Egan_(Quality_Universe)?oldid=1533381"
Community content is available under CC-BY-SA unless otherwise noted.