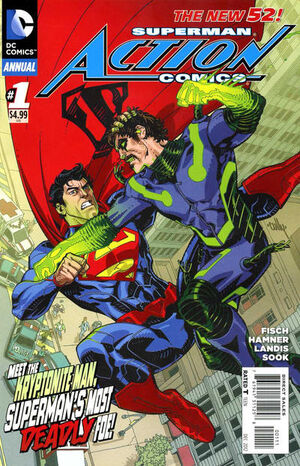 I wonder... maybe that's the mark of a superhero: Not the incredible powers or saving the day, but the effect you have on other people. Inspiring them to keep trying... and inspiring them to never give up.

Two weeks ago, a Doctor Abernathy was interviewing a man named Clay Ramsay in order to determine whether he would be a good candidate for the top secret Project K-Man. His reasons for wanting to be a part of the project are simple: he hates Superman. Superman left him without a home or a wife, and put him in the hospital. Since then, he had been trying to get revenge, but to no avail. He needed another way. Abernathy warned that the procedure, if successful, could make him more powerful than Superman. If it was not successful, it would likely kill him. Clay would take the risk.

Three days ago, Superman surprised Dr. John Henry Irons in his lab, while he was working on his suit of armour. At first, Irons was worried that Superman would be affected by the suit's power core and its radiation, but naturally, Superman was immune. He had come to discuss Irons' participation in the creation of the Metal-zero project, and how he had been present when Lex Luthor had tortured him. Irons assured Superman that while he had been involved, he had not understood what was planned for his work, and Superman had nothing to worry about from him.

Two days ago, Lex Luthor was getting chewed out by General Sam Lane for his part in the Collector of Worlds incident. The Defense Department had since cancelled their contract with Luthor, given that he sold out the planet to an alien invader. Unfortunately, Lane lacked the evidence required to link Luthor to the incident. As Lane threw Luthor out of his office, the man turned and warned that there was no way that the military could handle extra normal threats like Superman without his help. Lane suggested that he had alternative plans underway, though Luthor was doubtful they'd succeed.

One day ago, Doctor Abernathy had prepared Clay Ramsay for Project K-Man. Using a modified linear accelerator as a delivery system, they infuse Clay with radiation from a crystal of Kryptonite, taken from the Kryptonian Rocket. Over weeks, they would use the machine to slowly irradiate the cells of Clay's body until his cells were supercharged to a degree even greater than Superman's. The first treatment was intended to be mild, but Abernathy had miscalculated the power of Kryptonite, and the amount of radiation Clay was exposed to increased exponentially, leading to a system overload.

Fifteen minutes ago, a crane collapse threatened the life of a construction worker, and the lives of those who passed by below. Superman appeared to rescue them, pausing to pose for one of Jimmy Olsen's front-page photos. A green fist came out of nowhere, surprising Superman enough to drop the crane near the civilians below. Clay Ramsay, irradiated with massive amounts of Kryptonite, had come for his revenge. Superman was bewildered by his weakness, and further bewildered by the fact that his attacker is Ramsay. Superman had saved Ramsay's wife from his frequent beatings. He had never expected that Ramsay would think he had a right to revenge.

Angrily, Ramsay blasts Superman with Kryptonite radiation, claiming that he loves his wife, and demanding to know where Superman put her. Superman refuses to reveal her location, in order to keep her safe. Fortunately, he is rescued from Ramsay's fatal retaliation by Dr. Irons, who appears wearing his metal suit and knocks Ramsay aside with his hammer. Irons tosses Superman a HazMat suit to wear, while he turns his attention to the attacker.

Irons has determined that it is not Ramsay's strength that is hurting Superman, but the Kryptonite radiation. However, even without that, Ramsay would be stronger than Irons. Fortunately, Irons was only buying time for Superman to put the HazMat suit on. Protected from the radiation. Superman unleashes a flurry of blows, but Ramsay cleverly tears the suit open. Still, the intensity of Ramsay's Kryptonite blasts is weakening, and he needs to recharge. He will not get the opportunity, as Superman blasts him in the face with heat-vision, and finally knocks him unconscious.

In the aftermath of the fight, Superman suggests that Irons become a proper super hero, but the doctor declines. Instead, he has decided to be his own kind of hero: proprietor of a socially responsible tech company called Steelworks. Before parting ways, Irons warns that the only Kryptonite he knew about came from the rocket Superman came to earth on - so where did the Kryptonite Ramsay was irradiated by come from? Superman suggests that that investigation would be a job for Lois Lane.

Six months later, Dr. Irons' work would take him to the Australian desert. He would work with the natives to equip their village with solar power, his work inspired by the example that Superman set for him.

In the meantime, two days after the battle with Ramsay, Dr. Abernathy struggles through the wreckage of his lab to find the piece of Kryptonite that he lost. His employer, Luthor, warns that the crystal is irreplaceable - particularly given that he stole it from the military while he was under contract with them. The results of Project K-Man have not been entirely unsatisfactory. Luthor now knows that Kryptonite has the power to kill Superman.

Elsewhere, Clay Ramsay is now in federal custody. General Lane appears, offering a deal: he will give Ramsay access to Kryptonite if he will agree to be a government sanctioned "countermeasure" against Superman. Ramsay agrees, but first, Lane must find his wife.

When a S.T.A.R. Labs sub crashes far below the surface of the ocean, one of its scientists is exposed to experimental radiation. He is washed to shore, with memories of the life he had, and the woman he loved and lost. Alone on a desert island, he fights to survive, eating the local, tropical vegetation. When a leopard finds and attacks him, he unexpectedly emits a blast of radiation that vaporizes the feline's body. Eventually, he learns to use this power to his benefit, killing animals for food, and blasting away holes in the rock faces for shelter.

The radiation soon takes its toll on him, as he remembers how he had caught his wife flirting with someone at a dance club and murdered her in a jealous rage. In anger, he destroys most of the island. His face, meanwhile, practically melts away, revealing his radioactive skull.

Retrieved from "https://heykidscomics.fandom.com/wiki/Action_Comics_Annual_Vol_2_1?oldid=1391821"
Community content is available under CC-BY-SA unless otherwise noted.