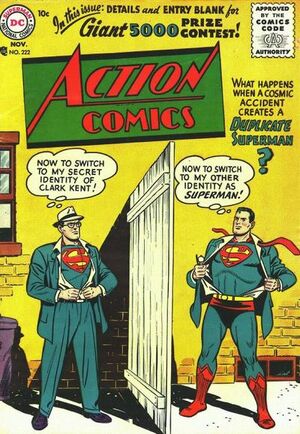 Appearing in "The Duplicate Superman"Edit

Synopsis for "The Duplicate Superman"Edit

Superman is split by a cobalt bomb’s explosion into two duplicate Supermen, differentiated only by the fact that one lacks a vision power the other has: Superman-T, as he calls himself, has telescopic vision, while Superman-X has X-ray vision. The two Supermen work together for a time, until Superman-T heroically sacrifices his life to knock aside a giant Kryptonite meteor heading towards Metropolis. Upon Superman-T’s death, Superman-X regains all his former powers.

Retrieved from "https://heykidscomics.fandom.com/wiki/Action_Comics_Vol_1_222?oldid=1483057"
Community content is available under CC-BY-SA unless otherwise noted.