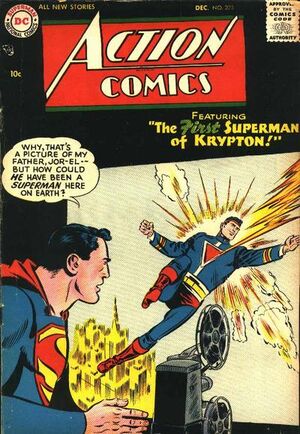 Appearing in "The First Superman of Krypton"Edit

Synopsis for "The First Superman of Krypton"Edit

Superman discovers a lead box in space containing another journal of Jor-El’s and some films which he made. When he reads the journal and views the films, he learns how Jor-El first discovered evidence of Krypton’s coming destruction shortly before Kal-El’s birth on the 10,000th year of Krypton’s civilization. Since the ruling Science Council of Krypton failed to heed his warning, Jor-El began a search for a suitable planet on which to relocate. He chose Earth as a possibility, and created an artificial site which duplicated Earth’s gravity and yellow-sun environiment to learn what effect they would have on Kryptonians. To his astonishment, he gained super-powers in the simulated Earth-site. However, the Science Council again rejected his findings, save for two members named Val-Arn and Khai-Zor. After they learned for themselves how they would become “supermen” on Earth, the two scientists captured Jor-El, Lara, and their newborn son Kal-El, and announced their plans to build a rocket which would take them to Earth, which they would tyrannize with their great powers. Jor-El tricked them into taking him to the Earth-simulation site, where he broke free of his bonds, shut off the gravity and yellow-sun machines, and captured them. After delivering them to the authorities, Jor-El made another trip to Krypton’s core in a mole machine and found the chain reaction was building. When he returned, he inserted a warning sequence depicting Krypton’s possible destruction in a film presented during the 10,000th anniversary celebration, and was denounced as a crackpot. The journal goes on to describe how Jor-El sent his son Kal-El to Earth in a rocket, and ends with a note to Kal-El, if he finds it, to remember his heritage as a Kryptonian and to do only good with his powers. Superman realizes his father was the first “superman” of Krypton, and silently promises to use his powers only in the cause of righteousness.

Retrieved from "https://heykidscomics.fandom.com/wiki/Action_Comics_Vol_1_223?oldid=1483058"
Community content is available under CC-BY-SA unless otherwise noted.