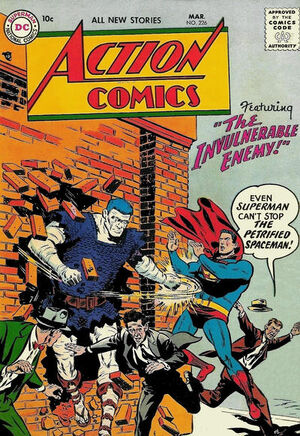 Appearing in "The Invulnerable Enemy"Edit

Synopsis for "The Invulnerable Enemy"Edit

A petrified man from outer space is dug up by archeologists and restored to life accidentally by Lex Luthor. The being, dubbed the Petrified Spaceman, wreaks havoc in Metropolis with his super-powers until Superman deduces that the Spaceman is in search of ice. When Superman surrounds him with ice, the Petrified Spaceman recovers his memory and his ability to communicate, and tells Superman he is an explorer from an ice world who was rendered immobile by Earth’s heat. Superman builds him a “spaceship” of ice blocks and hurls him back to his homeworld.

Retrieved from "https://heykidscomics.fandom.com/wiki/Action_Comics_Vol_1_226?oldid=1483061"
Community content is available under CC-BY-SA unless otherwise noted.