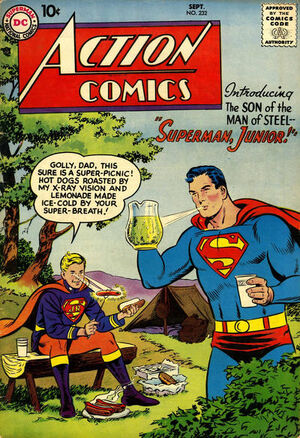 Appearing in "The Story of Superman, Junior"Edit

Synopsis for "The Story of Superman, Junior"Edit

Dr. Morton Kirk, believing that Earth was doomed to perish when a giant planet threatened to collide with it, sent his young son Jimmy off in a rocket, intending to place him on another world. But Superboy saved the Earth, though he was unable to find Jimmy Kirk, and the dying Dr. Kirk left him a last request: that if he found Jimmy, he would become his legal guardian. Years later, the space capsule carrying Jimmy crashes to Earth, and Superman learns that Jimmy’s passage through space has given him super-powers. He adopts Jimmy, gives him the identity of Superman, Jr., and moves to Smallville under a new secret identity...and all the while, a “super-poison” Superman has breathed in from the space capsule is robbing him of his powers.

Retrieved from "https://heykidscomics.fandom.com/wiki/Action_Comics_Vol_1_232?oldid=1483067"
Community content is available under CC-BY-SA unless otherwise noted.