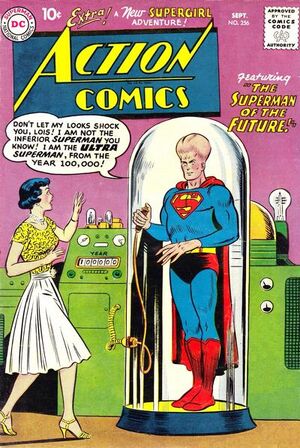 Calm down, Lois! You wouldn't look good with a... er... swelled head like the Ultra-Superman!

Appearing in "The Superman of the Future!"Edit

Synopsis for "The Superman of the Future!"Edit

A number of reporters have gathered to witness Professor Wright test his Time-Cabinet - a time travel device. Superman has agreed to help test the invention and seemingly disappears when the professor sends him to the year 100,000 A.D. When the Man of Steel reappears, his head is much larger and his fingers are longer - this man claims he is the Superman of the future and that he is taking the place of his contemporary counterpart for a day. He tells everyone present that he has come to the past in order to prevent four disasters from coming to pass.

The first three disasters come to pass as ordained, and all who were present during the Time-Cabinet display travel with this Ultra-Superman to see if he can prevent them from happening. All three times he fails to stop the disasters from happening, proving to himself that he cannot change the past and revealing that the final disaster is the assassination of the President of the United States.

When the intended assassination occurs, the culprit, Dirk Folgar, exposes himself as a spy when it turns out the Future-Superman was the only one riding the car and was uninjured. The Ultra-Superman turns out to be the modern day Superman, and that the whole Time-Cabinet display was a hoax perpetuated by Superman with the aid of Professor Wright to expose the spy, and that all the three previous disasters were additional hoaxes that were prepared by Superman. With Folgar's plot foiled, he is arrested by the police.

Appearing in "Janu, the Joker of the Jungle!!"Edit

Synopsis for "Janu, the Joker of the Jungle!!"Edit

Synopsis for "The Great Supergirl Mirage!"Edit

While secretly flying over Midvale, Supergirl begins to practice using her super-powers in secret so that she can be useful to Superman in the future. Believing that she is high enough to be unseen, she is unaware that fellow orphan Dick Wilson has taken her picture with an "eagle eye" camera lens. After finishing some super-feats she returns to the orphanage unaware that the snooping Wilson had noted that an essay that is due that afternoon is unfinished by Supergirl's civilian identity, Linda Lee. Realizing that the report is due, she uses her super-speed to finish writing the essay, arousing Dick's suspicions about her. Linda dismisses them by suggesting that what he saw was an unfinished draft.

Linda realizes that she now has her own version of Lana Lang. When Dick develops his photograph he realizes that he took a picture of a flying girl (and not a bird as he originally thought.) Suspicious that Linda is really this Supergirl, Dick tries different methods of exposing her secret identity. His first attempt involves using a dummy of himself being thrown off a cliff. It fails when Linda sees through his plot, but when she tries to use her x-ray vision to witness the spectacle, they accidentally set the dummy ablaze. Linda covers her tracks by bringing in a thunder cloud which strikes the dummy with a lightning bolt, eliminating Dick's certainty about Supergirl's identity.

His next trick involves using a set of prop dumbbells and real weights. He hopes to trick Linda into thinking that what is supposed to be a prop is actually a real weight, thereby exposing the fact that she has super strength. Also seeing through this ploy, Linda crushes a chunk of coal into a diamond and uses her super breath to secretly bore out the insides of the weights, making them as light as the props. Thus, she once again throws off Dick's exposé.

Finally, to set matters at ease, Superman (learning of Linda's plight) has a Supergirl robot built to cover for her and explain the existence of a "Supergirl" by having it put on a public show for the kids before departing.

Retrieved from "https://heykidscomics.fandom.com/wiki/Action_Comics_Vol_1_256?oldid=1550407"
Community content is available under CC-BY-SA unless otherwise noted.