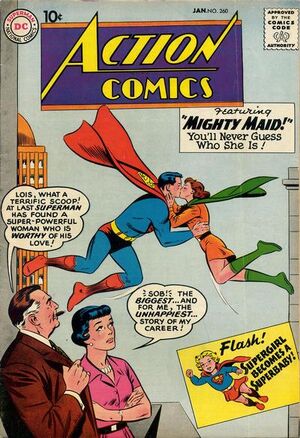 Hearing that Lois Lane has gone to investigate the "tornado belt", Clark Kent decides to check in on her and discovers that she has just been caught up in one of the area's many tornados. Rushing to her rescue as Superman, the Man of Steel and Lois are shocked that Lois has been rescued by a new super-human called Mighty Maid. Mighty Maid explains that she is from another dimension and after hearing of Superman, had decided to come to Earth to see him and all the wonders of Earth first hand. Superman agrees to show Mighty Maid around and the two fly off, leaving Lois to wonder if Superman will fall in love with this visitor from another world.

Showing Mighty Maid around the world gets the attention of the world press, and headlines report of Superman and Mighty Maid sharing a kiss further upset Lois Lane, who is asked to cover the story by Perry White. Suspecting that Superman may ask Mighty Maid to marry him becomes fact when Superman specifically comes to the Daily Planet to tell them his intentions. Lois is sent to cover the story, and she watches depressingly as the two super-humans have a picnic together.

Announcing his wedding, Superman explains that he intends on returning to Mighty Maid's dimension where he will retire from super-heroing. In front of so much fanfare, Superman and Mighty Maid prepare to depart. Lois tries one last ditch effort to expose Mighty Maid as a hoax figuring her for a robot, but it proves wrong and the two super humans seemingly transport themselves to the fourth dimension.

This however, turns out to all be a hoax, "Mighty Maid" turning out to be a disguised Supergirl. She is helping out her cousin in convincing an invading alien fleet that have been tracking Superman since Krypton's destruction. They wish to get revenge on the planet's last surviving son from a defeat at the hands of his race years before. With no Superman to combat, the aliens decide to call off their attack and return to their star system. With the threat over, Superman returns to Metropolis where he saves a surprised Lois Lane who falls off of a building.

Appearing in "The Girl Superbaby"Edit

Synopsis for "The Girl Superbaby"Edit

While in class as Linda Lee, Supergirl uses her x-ray vision to look out for any trouble that she could help with in secret. Seeing an old man drowning, Linda slips away and as Supergirl, burrows under the lake and creates a water spout to free the old man. To her surprise, the old man looks a lot younger, but she dismisses it. As it turns out, the water she saved the man from turns out to be a fountain of youth, and her exposure to it has transformed her into a superbaby.

After chasing a butterfly, the Superbaby takes a nap in the trunk of jewel thieves, Dude and Mojax, who retreat to their secret hide out, which is a cabin out in the wilderness. Superbaby wakes up and causes and inadvertently causes a series of events that leave the superstitious crooks to believe the place is haunted. Through dumb luck and coincidence, the Superbaby's playing alerts the authorities to the location of the jewel thieves and they are arrested without anyone seeing the Superbaby. The effects of the fountain wear off and Supergirl returns to her normal age and returns home to hear of the thieves' capture on the radio.

Appearing in "The Gladiator of the Jungle"Edit

Synopsis for "The Gladiator of the Jungle"Edit

Retrieved from "https://heykidscomics.fandom.com/wiki/Action_Comics_Vol_1_260?oldid=1517140"
Community content is available under CC-BY-SA unless otherwise noted.