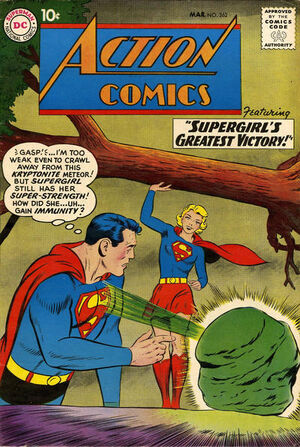 Appearing in "When Superman Lost His Powers"Edit

Synopsis for "When Superman Lost His Powers"Edit

Perry White, Clark Kent, Lois Lane, and Jimmy Olsen are all in Mexico to explore an ancient Aztec temple for an article in the Daily Planet. When Lois brazenly enters the temple, not heeding its warning they are all exposed to some strange vapors before they are attacked by a giant insect with a stinger. To his amazement, Clark finds that the vapors stripped him of his super-powers when the insects sting actually manages to hurt him. When they are attacked by a giant spider and a fire breathing dragon, Clark suspects that they were somehow transported to another dimension. They flee and seek cover in a cave, where Clark begins to generate a fever from his injuries, Lois suspects him of being Superman. However, when she is able to give him a shot of penicillin and the needle actually punctures his skin, she is fooled once more. Perry and the others leave Clark in the cave to take pictures, while Jimmy turns on his Superman signal watch and wait for Superman to arrive and rescue them.

After an hours rest and waking up alone, Clark changes into Superman and goes outside, where he uses a hollowed out egg to make a dramatic appearance. When the others ask Superman to fly them back to Earth, he suggests to them to stay for 48 hours to get a real scoop of a story for the Daily Planet. Superman manages to fake various super feats to make them think he still has his powers. He saves them from the fire breathing dragon by constructing a glider out of his cape. When Lois goes to check on Clark, Superman rushes across giant spider-webs to beat her to the cave and change back into Clark Kent. While Clark is shaving his face, Lois snips some of his hair to once more prove to herself that Clark can't be Superman.

Resuming his Superman guise, Clark fights off a sea serpent and later cooks fish that Jimmy and Perry caught. The latter the others assumed Superman did so with his x-ray vision, however in reality he just coaxed the fire breathing dragon into cooking the fish with it's fire breath.

Changing back into Clark Kent, the group call it a night, however when they wake up they find themselves back in Mexico at the temple. Their guide tells them that they have been asleep for 2 minutes not 2 days, and when Jimmy checks the film in his camera, he finds that his pictures were ruined by water. Clark is relieved to learn that his super-powers are back to normal. The whole caper ends on an amusing note when Lois, who still had the lock of Clark's hair, tries to cut it again and finding it indestructible, confusing her considerably.

As the children of Midvale Orphanage enjoy a day playing outside, Linda Lee secretly uses her powers to insure that the children have a good time. Later, viewing a chunk of Kryptonite crashing on Earth, Linda reflects on the events that led to her coming to Earth and becoming Supergirl. In recalling these events, she comes up with an idea to possibly counteract the effects of Kryptonite. Changing into Supergirl, the Girl of Steel flies to Superman's Fortress of Solitude to tell him of her idea.

She suggests slow exposures to Kryptonite might eventually make them immune to it's effects. Superman tells her that he's already tried this and it didn't work. Supergirl, having just recently arrive on Earth, suggests that maybe since she is new to Kryptonite's effects maybe she can develop an immunity. Superman tries to dissuade her from this idea, and changes the subject by showing her the various alien artifacts, plants and animals that he's brought to Earth from his various missions in space. Using her x-ray vision to see a special rainbow flower, the accidentally breaks open the display case of an alien creature that eats metal, unknown to them the creature escapes.

Leaving the Fortress, Supergirl decides to try and test her theory without Superman's help. She finds a chunk of Kryptonite in a cave to test her powers on. To her surprise the experiment works, and as time goes by she can get closer and closer to the Kryptonite without feeling its ill effects or it effecting her powers. Superman uses his x-ray vision to check on his cousin and sees that she has succeeded. Deciding to burrow to where she is, Superman comes across another Kryptonite meteor deep in the Earth, and is immediately struck ill from it. Witnessing her cousins plight, Supergirl goes to his rescue and finds that this Kryptonite has its full effect on her. The two narrowly cheat death by using their waning x-ray vision to melt enough of the cavern ceiling to cover the Kryptonite.

Retrieved from "https://heykidscomics.fandom.com/wiki/Action_Comics_Vol_1_262?oldid=1517133"
Community content is available under CC-BY-SA unless otherwise noted.