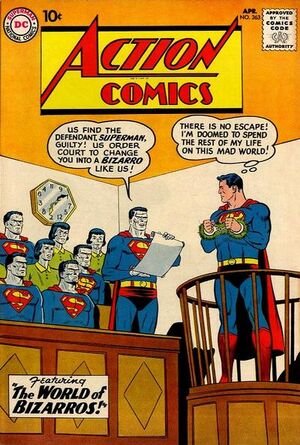 Us do opposite of all Earthly things! Us hate beauty! Us love ugliness! Is big crime to make anything perfect on Bizarro World!

Appearing in "The World of Bizarros"Edit

Synopsis for "The World of Bizarros"Edit

After being given a Bizarro Lois to love, Bizarro took his bride to be into the stars and found an abandoned and dead world for them to live on. When Bizarro Lois complained of being lonely, Bizarro built a device to create new Bizarros, all of whom either look like Bizarro or Bizarro Lois Lane. They set up their own imperfect society and name their planet Htrae, or Bizarro World.

Superman happens upon Bizarro World one day while towing a meteor into space and decides to check it out, he's interested to see that almost everything on Bizarro World is imperfect imitations of things commonly found on Earth. Clocks with the numbers out of order, a reverse design of the American flag, bent spoons are all common place in Bizarro World. Superman is initially welcomed on the planet until he sees the ram-shackle homes that the Bizarros live in. Superman decides to fix up all the homes, not realizing that perfecting something on Bizarro World is a crime, and the Man of Steel finds himself arrested.

Put in a prison and forced to work, Superman spends days as a prisoner of the Bizarros until his court date. Before he's put to trial, he's visited by the original Bizarro Lois Lane, who tells Superman that she will convince the jury to find him innocent if he agrees to marry her, Superman refuses to do so. When he is put to trial, (the court run by the original Bizarro) Superman is found guilty (thanks to the furious original Bizarro Lois getting the jury into a frenzy in revenge for being jilted by the Man of Steel.) Superman is sentenced be zapped with a ray that will make him look just like a Bizarro.

After secretly using her powers to make sure supper at the orphanage isn't ruined, Supergirl probes around the world with her x-ray vision and happens upon a youth that is lost at sea. Changing into Supergirl, she secretly saves the boy when she puts him in the way of a US Naval vessel. The captain on board is shocked to find that the boy doesn't speak any known language and is wearing a strangely designed necklace. The boy is coincidentally brought to Midvale Orphanage while the authorities try to figure out what to do with him. Linda Lee is charged with teaching the boy, dubbed Johnny Blank, how to speak English.

A series of disasters hit the orphanage, including a falling tree, and a fire, forcing Linda to try and secretly stop them using her powers as Supergirl. However, this is all witnessed by Johnny, Linda doesn't learn this until he accidentally shoots off her wig with a bow and arrow and covers for her to cover up her identity. Realizing that Johnny's necklace is the coordinates of his home planet, she deduces that he's an alien.

Preventing Johnny from being adopted, Supergirl confronts him at night, and restores his memories. He recalls that he crash landed on Earth after being exiled from his planet Korvia. He explained that he's name is Valzorr and that the evil Zoxxo had exiled him after framing him for assassinating his aunt and uncle who were rulers of the planet. Supergirl agrees to take him back to Korvia and prove his innocence. Learning that the murder weapon was an Atom Transporter, Supergirl uses it to reconstruct Valzorr's aunt and uncle who corroborate Valzorr's story and Zoxxo is taken prisoner.

Returning back to Earth, Supergirl reveals to the reader that she now has her own Supergirl robot to cover for her as Linda Lee whenever she is away from the orphanage for an extended period of time.

Retrieved from "https://heykidscomics.fandom.com/wiki/Action_Comics_Vol_1_263?oldid=1517136"
Community content is available under CC-BY-SA unless otherwise noted.