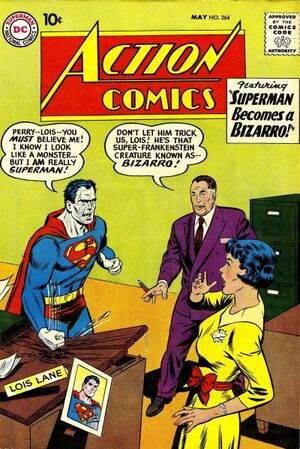 Appearing in "The Superman Bizarro"Edit

Synopsis for "The Superman Bizarro"Edit

Continued from last issue... Superman is blasted with a ray to make him look like a Bizarro as punishment for breaking Bizarro law that nothing can be made perfect. Now this an ugly form, Superman is released from custody, and flees Bizarro World because all the Bizarro Lois Lane duplicates want to marry the now ugly Superman. Returning to Earth, Superman tries to disguise his transformation by creating a life-like plastic mask to wear in both his identity of Superman and Clark Kent. However, when helping out with a missile test, Superman's mask is destroyed and the military attack him when they confuse him for Bizarro.

When Superman tries to get help from Lois Lane, Perry White and Jimmy Olsen, they refuse to believe his story, and Lois even goes so far as to suggest that Bizarro probably killed Superman. Superman is then arrested and locked in a jail until he can prove his story.

Suddenly, Superman wakes up, still in his normal form and still on Bizarro world, the whole episode being a dream. With his trial still pending. He's is then put in a gladiatorial arena where he has to fight imprisoned Bizarros, which he wins. In reward, the original Bizarro steps up his sentencing for the next day at sunset. When a flawed Bizarro Lois poses as the original and offers to help Superman escape, she is caught and arrested herself.

The next day, Superman is brought to trial, and quick thinking he asks the court to let him go if he can find one thing about Bizarro World that's still perfect. Bizarro allows this, and Superman builds a crude television satellite and sends it into orbit. It beams back pictures showing that Bizarro World is perfectly round. Superman then offers his aid to make the planet "imperfect", and with Bizarro's blessing Superman makes the world square. With this task completed, Bizarro clears Superman of all wrong doing and allows him to leave.

Appearing in "Supergirl Gets Adopted!"Edit

Synopsis for "Supergirl Gets Adopted!"Edit

After secretly saving an airplane as Supergirl, Linda Lee returns to the Midvale Orphanage to learn that a Mr. and Mrs. Wilkins were coming to adopt a girl, and Miss Heart wants all the girls present. Linda once more trying to avoid getting adopted puts on a filthy dress in the hopes of dissuading the Wilkins from adopting her. However, this fails as the Wilkins find that Linda reminds them of their daughter who had died and choose Linda to be their adopted daughter, much to her dismay
Living with the Wilkins, Linda learns that Mr. Wilkins is a police officer who has been charged with dealing trying to smash the various rackets in town. While sewing with Mrs. Wilkins, Linda grows bored and uses her x-ray vision to watch Mr. Wilkins in action. Realizing that he's at the risk of getting hit by a subway train trying to stop a crook, Linda hypnotizes Mrs. Wilkins and goes into action as Supergirl. Disguising herself as her cousin Superman, Supergirl rescues him.

Later when Mr. Wilkins protects a boxer who wont throw a fight, some thugs try to cut the cable of the elevator they are traveling in, however they are secretly saved by Supergirl and Wilkins arrests his would-be killers. Later still, Supergirl is present to save Mr. Wilkins from being run over. Later visiting Mr. Wilkin as Linda Lee, a criminal tries to throw a bomb at Wilkins. When Wilkins fails to shield the bomb with his body, Linda secretly uses her x-ray vision to defuse it.

Returning home, the Wilkins decide that because of Mr. Wilkin's job, it's not safe to keep her as their biological daughter was murdered by the very criminals that Mr. Wilkins were trying to nab. Unable to tell them that she is really Supergirl, she accepts their wishes and returns back to the Midvale Orphanage, hoping that someday she will find a family she won't have to hide her true identity from.

Retrieved from "https://heykidscomics.fandom.com/wiki/Action_Comics_Vol_1_264?oldid=1393246"
Community content is available under CC-BY-SA unless otherwise noted.